As Charlie Sheen films his new FX show Anger Management, he looks back at his behavior while on Two and a Half Men and is having more fun now than ever before. 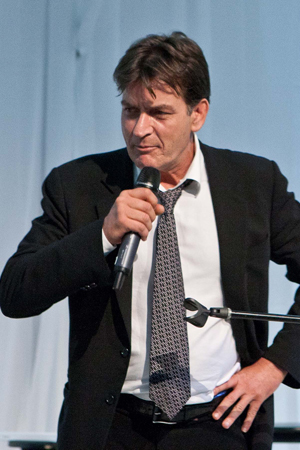 Actor Charlie Sheen seems to think so. He discussed his very public meltdown with Matt Lauer while on The Today Show, and the documentary he now refuses to make by compiling footage of his behavior.

“Ew, whoa, can’t put that back out,” said Sheen while watching footage from last year’s Torpedo of Truth Tour. “It was a little cringeable; I didn’t recognize parts of who that guy was.”

Lauer mentioned that it must’ve been an out-of-body experience for Sheen. “Yeah, just wish it was somebody else’s body,” he joked.

How did he manage to change? “It was a team effort ultimately led by myself, because it has to be,” he reflected. “There was a lot of close friends, there was a lot of support. There’s not a lot of people close by saying, ‘Hey dude, you might just want to take a step back, and let’s watch this, [the shocking footage].'”

And this summer, he’s returning to television with the FX sitcom, Anger Management.

“I didn’t really have a plan, the plan was to just reintroduce myself to America and the media and say, ‘Sorry about that; here’s what’s happening now,'” he said of his new show.

Though he was fired from the hit show Two and a Half Men last year — and lost his paycheck as the highest paid man on television, he now looks back without bitterness.

He also noted Men’s casting of Kathy Bates to play the ghost of Charlie Harper. “If that was s supposed to be an insult, they missed because I was honored,” he said.