After nearly five years since her first DUI arrest, Lindsay Lohan is a free bird and ready to get to work. Hear Judge Sautner’s final warning and Lohan’s last words. 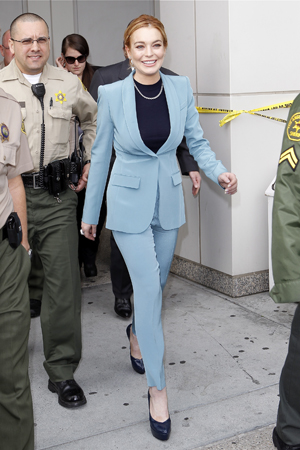 If you’re sick of seeing Lindsay Lohan in the tabloids and miss the days when she was flooded with scripts (because her SNL stint just didn’t cut it), you’re in luck. The child star’s probation is ending just as she’s set to appear in the Glee season finale and Liz & Dick, the highly anticipated Elizabeth Taylor biopic from Lifetime.

“She has done everything this court has asked of her,” Judge Stephanie Sautner said earlier today, according to People.

It’s been almost five years since the first of her two DUI arrests, and she’s finally satisfied her probation terms for these cases. No more probation officers, court appearances, janitorial duty at the L.A. County morgue, or therapy sessions. And hopefully, no more rounds of rehab.

Just to be safe, the judge did give the actress a final warning.

“You need to live your life in a more mature way,” Sautner said. “Stop the nightclubbing and focus on your work. I don’t expect to see you again.”

“I just want to say thank you for being fair,” Lohan respectfully responded. “It’s opened a lot of doors for me, so I really appreciate it.”

“It’s not that hard [to stay out of trouble],” Sautner added. “I know it’s hard when you have people following you all over the place, but that’s the life you chose.”

She’s not off the hook completely, though. Lohan will serve an informal probation until May 24, 2014, as part of the necklace theft case. Yet her only requirement, the judge said, will be to obey all laws — or end up in jail for up to 245 days! Can Lohan manage to keep her record clean for two and a half more years?