Tori Spelling and Dean McDermott have a ton to celebrate — besides a fourth bun in the oven, Tori will also soon be welcoming a new TV show and book! 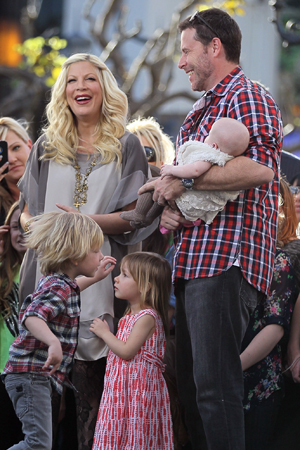 Leave it to Hollywood’s super mom to not only revel in a fourth pregnancy, but also do so just in time for a new book and reality television show on TLC!

“This is actually the best pregnancy I’ve had so far out of all of them,” Spelling told People. “Knock on wood. [I have] no morning sickness and I have energy. [It’s the] total opposite than other three.”

This summer, craft fans and DIY-extraordinaires can tune into Craft Wars, which will premiere on TLC on June 26. The show will place three competitors against each other in two rounds of crafting challenges. Tori Spelling will serve as both host and executive producer.

As shown on her Oxygen show Tori & Dean: Home Sweet Hollywood, this show is right up her alley. “We are a very crafty family,” explained the expectant mother. “[My husband] Dean [McDermott] is super crafty! He’s the builder in our family. He’s amazing at building things and painting them, and then I decorate them. We are a great team.”

In the past, Dean’s creations have included everything from a homemade easel with a pop-art painting to a ghost-filled haunted house for Liam’s birthday party. “I told him he could totally compete on Craft Wars,” she noted. “I bet he’d win.”

And apparently, the handy passion runs in the family! “Liam and Stella love to get creative,” added Spelling. “We craft every weekend. The worst that has happened is [my kids] got into the glitter.”

Can’t wait until late June to craft with Spelling? Grab a copy of her upcoming party-planning book CelebraTORI on April 3, complete with plenty of themed crafts fit for any gathering!