It’s still alive! Fox has given the greenlight to an eighth season of their hit dramedy, Bones. Prepare for more mysteries and hijinks from Dr. Temperance Brennan and Special Agent Seeley Booth. 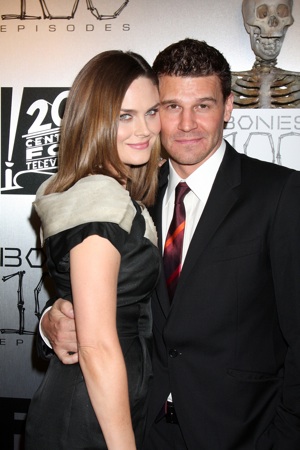 Fox has found a good thing and they’re not letting it go. The network has officially renewed the veteran series Bones for an eighth season!

According to TVLine, the news was announced earlier today by Fox Entertainment President Kevin Reilly.

“Over the past seven seasons, Hart Hanson [series creator], Stephen Nathan [exec producer] and the incredible Bones cast and crew have redefined the traditional crime procedural with an irreverent and adventurous sensibility and I’m really happy to have this distinctive, fan-favorite on our schedule for another season.”

With the eighth season comes a huge milestone for the Bones family. The show will celebrate its 150th episode during its run.

Bones debuted in 2005 and is one of Fox’s most popular scripted programs. The cast is led by Emily Deschanel (who plays the title character) and David Boreanaz (Buffy the Vampire Slayer, Angel).

Bones will continue its current season with the April 2 airing of “The Prisoner in the Pipe.” The network will run seven consecutive episodes, which will be a breath of fresh air considering its previous hiatus.

Here’s the official synopsis for “The Prisoner in the Pipe:”

The remains of an escaped convict are found in a residential sewer, but an examination of the sewer pipes indicates that the murder occurred within prison walls. When Brennan (Deschanel) insists on solving the crime — despite Booth’s (Boreanaz) pleas for her not to overexert herself — the expectant couple experiences a very untraditional arrival of their baby daughter.

Are you psyched for another season of Bones?