Sarah Pekkanen blew onto the women’s fiction scene 2 years ago with her debut novel The Opposite of Me — a riveting book about the unique relationship between sisters. She then tackled the difficult issues of love and money in a dying marriage in Skipping a Beat. Now, in her third novel These Girls, Pekkanen sets her sights on three single women in New York City as they navigate the difficult waters of work and love, finding unexpected rewards in their friendships. We couldn’t get enough of Sarah’s amazing characters, which is why this is our Red Hot Book of the Week.

Sarah Pekkanen has proven time and again that she’s an author to watch — and her latest novel is no exception. These Girls features three very different women who have all made their way to New York City 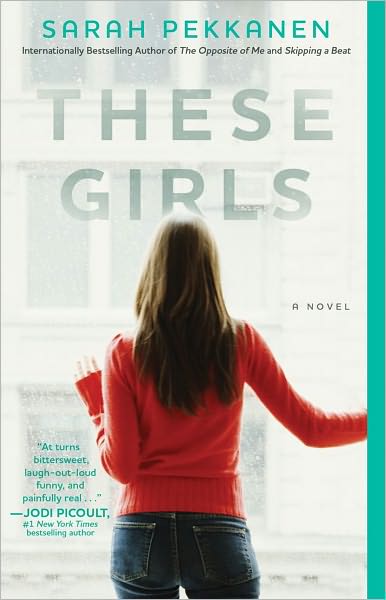 for different reasons. Readers will find themselves sympathizing with all three as they face difficult situations, as secrets from their past threaten to surface. The real reward of the novel, though, is in the way the friendship among them change each woman for the better. It’s a beautiful testament to the power of women’s friendships, as well as a riveting read from beginning to end.

Cate, Renee, and Abby couldn’t be more different — but they have a few (very important) characteristics in common: they are all women, are roughly the same age, and have found themselves in New York City. Cate is the new features editor of Gloss Magazine, and she couldn’t be more thrilled. It’s quite an achievement for someone her age, but she quickly realizes things may not be as smooth as she’d hoped. She has to prove to everyone around her (as well as herself) that she’s capable of doing the huge job. What’s more, Cate has a secret she hasn’t shared with anyone — which constantly threatens to drag her down and destroy everything she’s worked so hard to accomplish.

Renee, Cate’s roommate, also works at Gloss and is hoping for her own promotion soon. There’s just one problem: Renee’s curvy figure doesn’t exactly fit in at the New York magazine. Not only does she stand out due to her voluptuousness, Renee is actually worried that her body may impede her career progress. Desperate to lose weight — and perhaps in doing so, win a promotion as well as the heart of the man she’s been crushing on for years — Renee takes some dangerous risks for the sake of being thin.

Abby is a nanny to an adorable young girl, and everything seems to be going right in her life. That is, until something happens — something she won’t talk about, and she flees from Maryland to New York City. All Cate and Renee know is that Abby needs help, and as they’re in search of a third roommate, they take her in. These very different women find unexpected rewards through their support of one another and begin to heal the scars of their respective pasts through the support of their girlfriends.