If Nadya Suleman’s nude photos give you the willies, you aren’t alone. Octomom has finally given her nude photos a look, and explained why she’d do it all again. 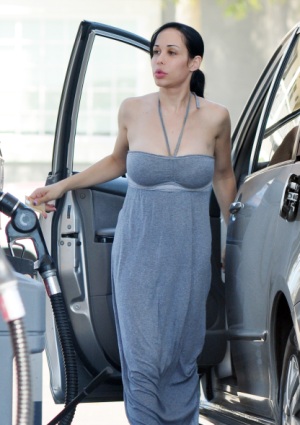 After Octomom Nadya Suleman posed partially nude for photographs to earn rent money, she refused to look at the end product. Though curious eyes worldwide searched the web for a peek at the pasty mother of 14, she opted not to look at a single image until days later.

After inviting Celebuzz cameras into her home, Nadya Suleman shuffled through the semi-nude photos of herself, declaring her pale skin to be “corpse-like.”

“I’m happy that I’m un-photogenic because 99 percent of the time people don’t recognize me in person,” 36-year-old Octomom told the cameras. “That’s kind of cool. I like being un-photogenic.”

Nadya Suleman went on to admit she’s “rationalizing” the decision to take partially nude photographs for $10,000 in her own mind. Pointing out Closer, the magazine that bought the photos, is a women’s magazine, not “exploitative” and “hyper-sexualized” like its male counterparts, she said, “I’m perceiving [the photographs] as kind of a celebration of being strong, independent. A form of empowerment.”

Insisting the only motivation for agreeing to the nude photos was to earn money to provide for her 14 children, including her 3-year-old octuplets, Nadya Suleman said we may see more of her corpse-y bod in the future. “I would be open-minded to doing something like this again,” she shared. “As long as it’s appropriate and respectable, and I can still hold onto my morals and values.”

“That’s why I have a difficult [time] doing something like [posing semi-nude], because that’s all surface,” Nadya Suleman concluded, obviously still not entirely at peace with the photographs in her hand. “That’s not who I am.”