British actress Kristin Scott Thomas shows us her funny bone as the hilarious press secretary in this exclusive clip from the new romantic comedy Salmon Fishing in the Yemen. 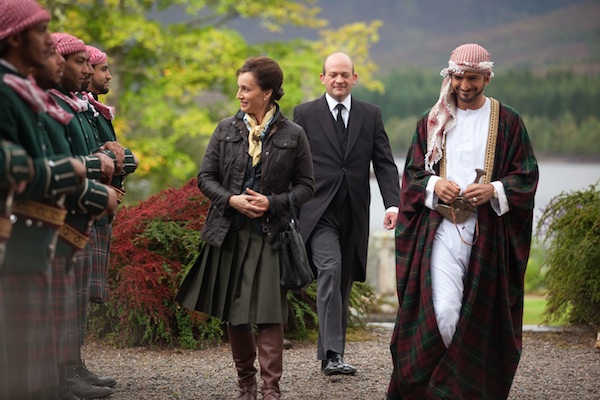 You might remember her as the sexy temptress from The English Patient or as Tom Cruise’s über-serious co-agent in the first Mission: Impossible, but British actress Kristin Scott Thomas takes a departure from her more serious roles to show us she’s a true comedian at heart.

Stealing absolutely every scene with her hilarious wit and aggressive banter, Thomas plays the overzealous, narcissistic press secretary to the Prime Minister of Great Britain in the new romantic comedy Salmon Fishing in the Yemen.

The film, based on the popular book of the same name, is about a very wealthy sheikh whose only goal in life seems to be bringing the sport of salmon fishing to the Yemen. Sound crazy? It is.

This is no simple task for the sheikh’s assistant (played by Emily Blunt), nor the British fish expert (played by Ewan McGregor) they hire to get the job done.

Or course, there’s a bit of falling in love that takes place between these two characters, and the audience gets to slip into the dreamy world of what if anything were possible.

Celebrity interview: Ewan McGregor and Emily Blunt on the art of falling in love >>

Where does Thomas’ character come in? The bitter, sarcastic woman who realizes this fishing hoopla is the best way to get her boss reelected is much-needed comic relief. She brings levity to the tense and sometimes awkward romance developing between Blunt and McGregor. And we love every minute of it.

In this exclusive clip, SheKnows gives you a look at one of the funniest parts of the film. Thomas’ character is dealing with her job as the challenging press secretary who must do whatever is possible to save the face of British politics.