Amandla Stenberg, currently on a rocket to fame thanks to her role as Rue in The Hunger Games, is holding her young head high amidst a controversy about race. 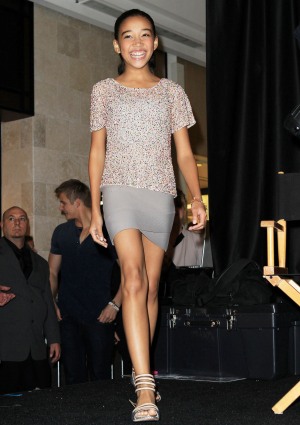 Amandla Stenberg has spoken out to address racist comments that have appeared on Twitter in response to her role as Rue in The Hunger Games. The young star has been attacked for her skin color despite author Suzanne Collins describing the character as “having dark brown skin and eyes” in her hit novel.

One such racist Hunger Games tweet stated, “Why does rue have to be black not gonna lie kinda ruined the movie.”

Another tweeted, “Why did the producer make all the good characters black?”

The Hunger Games scorches at the box office >>

In response to the controversy, 13-year-old Amandla Stenberg told Us Weekly in a statement, “As a fan of the books, I feel fortunate to be part of The Hunger Games family.”

“It was an amazing experience; I am proud of the film and my performance,” the actress went on to say. “I want to thank all of my fans and the entire Hunger Games community for their support and loyalty.”

Veteran actor and musician Lenny Kravitz, who took on the role of stylist Cinna, has also been mentioned in the controversy, though Suzanne Collins did not describe the character’s race in The Hunger Games book.

A rep for Dayo Okeniyi, who took on the role of District 11’s Thresh, said the Nigerian actor had no comment on the The Hunger Games controversy over race.

Despite the hateful tweets sent by a few, many more fans are speaking out in support of the actors. One such Twitter user commented Wednesday, “You are a racist & should be ashamed if you have a problem with the casting of Rue in The Hunger Games.”

How do you think young Amandla Stenberg did responding to the hate tweets?