Though noteworthy performances include Jennifer Lawrence as Katniss and Amandla Stenberg as Rue, it’s Josh Hutcherson as Peeta who’s the winning act! 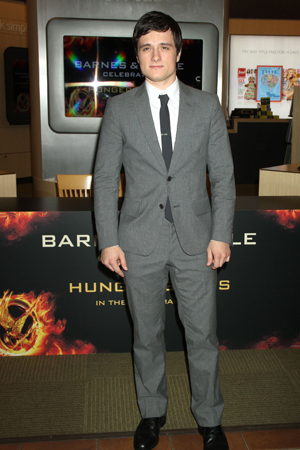 After only one record-breaking weekend at the box office, one actor of The Hunger Games is already collecting an award!

CinemaCon, the official convention of The National Association of Theatre Owners (NATO) and the largest and most important gathering of cinema owners and operators from around the world, has announced this year’s recipient of their Breakthrough Performer Award — congratulations, Josh Hutcherson!

“With an already impressive resume of films under his belt, Hutcherson is one of the most accomplished young actors of his time,” noted CinemaCon’s managing director, Mitch Neuhauser.

Not only is Hutcherson a Hunger Games costar as Peeta Mellark, but he also starred in Journey 2: Mysterious Island earlier this year and looks forward to Red Dawn, Detention and Seven Days in Havana.

At only 19 years old, his credits already include The Kids Are All Right, The Vampire’s Assistant, Journey to the Center of the Earth, Bridge to Terabithia and The Polar Express, among other film projects.

“With the release of The Hunger Games, Hutcherson is poised to take the movie world by storm,” continued Neuhauser, “and we could not be more excited to present such a talented young actor with the CinemaCon Breakthrough Performer of the Year Award.”

Hutcherson will be honored at the CinemaCon Big Screen Achievement Awards ceremony April 26, in The Colosseum at Caesars Palace in Las Vegas.