No marriage split is easy, even in Hollywood. Actress Jennie Garth recounts the moment when husband Peter Facinelli asked for a divorce. 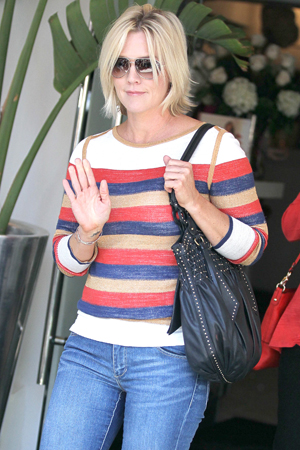 It came as a shock when the couple made the announcement that Jennie Garth and Peter Facinelli were set to divorce, after 11 years of marriage. Though the actress reaffirms that she’s doing great — thanks to a new reality show on CMT and a home in rural California, she reveals that the initial moments of the split were especially difficult.

“I was very resistant,” she told People of her divorce from Facinelli in a new interview. “I didn’t want it to happen. It took me some time to come to peace with it.”

Over the past couple years, the “Facinelli Five” — Peter, Jennie and daughters Luca, Lola and Fiona — found themselves switching from family traditions to long-distance relationships, as Jennie’s husband played a regular role on Showtime’s Nurse Jackie and the lifesaving Dr. Carlisle Cullen in The Twilight Saga.

The women of the family moved into their California ranch house in Santa Ynez Valley, while Facinelli commuted from Vancouver and New York City.

“He would do everything he could to fly back every weekend,” explained Garth. “[But] it took a real toll on our marriage.”

However, she has had some time to recover from the shock and is looking forward to better days.

“I’ve gone through my darkest parts and I’m coming out of it,” said Garth. “I’m okay. I don’t know what the future holds, but then I’ve never been a planner. And maybe that’s a good thing.”