Tennis icon Martina Navratilova was voted off Dancing with the Stars Tuesday night after a poor showing on Monday. Find out how she reacted to her ouster. 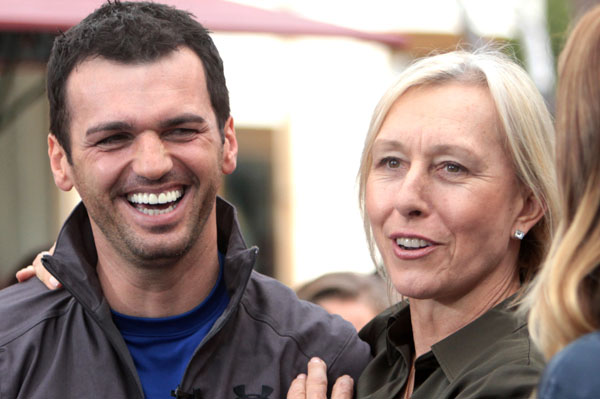 Tennis champion Martina Navratilova had a good attitude on Wednesday morning, just hours after she was voted off Dancing with the Stars. Navratilova — the first star voted off the 14th season — said she overcame her biggest fear on the show.

“This show is really such a different competition than anything I’ve ever faced in my entire career and challenging in a completely new way,” she told the Los Angeles Times. “You really can’t compare it to anything and it’s a one-of-a-kind experience I’ll remember for the rest of my life. It allowed me to face down one of my biggest fears, and even though I didn’t get the votes this week, I still feel like I really accomplished something. And not just putting on high heels and getting dressed up.”

Her partner, Tony Dovolani, was reportedly heartbroken when his partner got the cut. “Martina’s probably one of the most wonderful people I’ve ever had the chance to work with. Not only is she a female icon, but she has probably the kindest heart I’ve ever met. So, I’m actually pretty destroyed right now,” he said.

Remember: This guy had to deal with Kate Gosselin on Dancing with the Stars, so we’re sure he’s telling the truth with that statement.

Still, the 55-year-old plans to take her skills home and continue dancing.

“I really felt like I learned to dance and I can walk away with my head held high knowing that I worked my tail off,” she said. “I gave it my all and if I’ve inspired even one person, then it was all worth it.”

We think she deserved to stay over other competitors like Gavin DeGraw and Melissa Gilbert.

Who do you think deserved to get kicked off the dance floor on this week’s Dancing with the Stars?