Megan Fox is known as a pretty face among the Hollywood crowd, and that’s fine by her! The reportedly pregnant star wouldn’t trade in to be an “unattractive girl.” 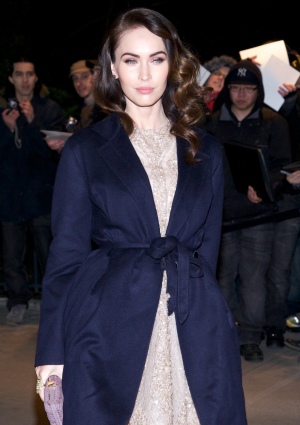 Megan Fox knows what good looks can do for a gal. The 25-year-old, who appears in the new movie Friends with Kids, recently spoke to Jalouse magazine about the possibility of giving up her pretty face.

When asked how she deals with being evaluated foremost on her looks, Global Grind reports Megan Fox commented, “I live well with my image, I cannot complain.”

The actress, who insists she doesn’t use Botox, went on to say she absolutely would not downgrade her attractiveness in an effort to be taken more seriously. “I would not trade my place with an unattractive girl,” she told Jalouse.

Megan Fox wants to be a scientist… no, really >>

Yet despite the seemingly soaring confidence, Megan Fox insists she struggles with being photographed. “I hate taking pictures, I never watch them, otherwise I would have wanted to change everything,” she said of being on a photo shoot set. “I prefer not to see any and trust the photographer, who knows his job.”

As for her role in Friends with Kids, Megan Fox told the magazine, “I’m Mary Jane, the character played by Adam Scott thinks he is her soul mate. But he has a baby, I’m very independent, and he disapproves of her lifestyle.”

The subject of babies isn’t just work for Megan Fox anymore. Rumor has it the actress and husband Brian Austin Green are expecting a bundle of joy! Looks like the blue coat she chose to wear to the New York City screening of Friends with Kids in early March may have been hiding a secret baby bump!

Would you rather have good looks like Megan Fox, or be taken more seriously?