Dennis Rodman may be a member of the NBA Hall of Fame, but his bank account troubles are now legendary: Rodman owes over $860,000 in child and spousal support. He faces jail time if he can’t get caught up by May 29. 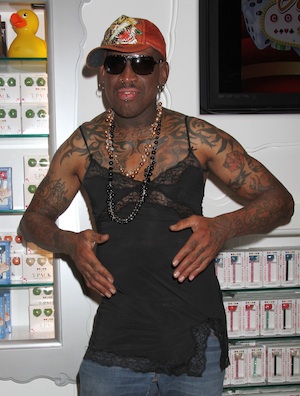 Back in 2004, Dennis Rodman‘s financial life seemed pretty good. He was able to spend more than $31,000 a month on partying, owned a few multi-million dollar homes and several cool man-toys like a speedboat and a Hummer. Rodman might long for those days since recent court paperwork shows Dennis owes $860,376 in child support and alimony to ex-wife Michelle Rodman. Dennis is ordered to pay over $10,000 each month for his ex-wife and children.

The LA Times spoke with Rodman’s financial advisor, Peggy Williams. She calls Rodman ” a sweet person” and feels sorry for him. Peggy explained his cash flow problems are directly related to his long battle with substance abuse. She told the Times, “His addiction impacts his ability to get work.”

In court documents, Williams was also blunt about the state of Rodman’s financial affairs. “This year, Dennis may only make $50,000 a year.” Ouch. That’s a big fall. Dennis earned over $550,000 just a few years ago.

Rodman was a star on the third season of Celebrity Rehab in 2009. He first entered rehab in 2008.

Williams believes Rodman’s financial woes are in large part due to his emotional turmoil over the divorce. “This case, especially his wife filing for divorce, has put him on a binge that I have never seen before.”