Game of Thrones season two premieres Sunday on HBO. Here’s a quick cheat sheet for what you might have missed season one to get you up to speed.

Related story Bella Ramsey on the 'Chessboard' of Becoming Elizabeth, Fame After Game of Thrones, & More 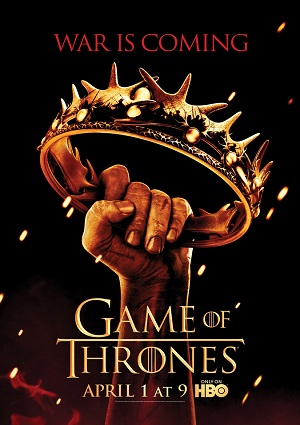 Even if you’ve never watched — now’s the time to jump in. There is plenty for everyone in Game of Thrones. This is a show you can easily become obsessed with as it’s basically like a more lethal “game” of office politics. As the Queen said in season one, “When you play the game of thrones, you win or you die.” (Lena Headey as the Queen.) Mix quasi-history (think Harry Potter-esque for grown-ups) , swearing, violence, weirdness (dragons hatching from eggs, whaaaaa!?) and sex (no, not with dragons), and that pretty much describes your viewing experience watching Game of Thrones. It should be noted that one episode cannot be consumed easily, you will instantly want to devour two, then three until you have a Game of Thrones marathon on your sofa. If there is one thing that’s true about Game of Thrones, it’s that this bold, sweeping, mythic, fantasy drama is highly addictive.

It would take a book (since it’s based on a book) to really recap season one. In fact, take a look at this family tree done by someone with a lot of time on their hands and masterful knowledge of PowerPoint by HauteSlides here.

Season one is full of surprises (and a few are divulged here, so spoiler alert!). Each episode opens with an overview of the land of Westeros and the Seven Kingdoms, each different in their climate, terrain and the people who inhabit them. A favorite is the House of Stark, in the north; they rule from their castle at Winterfell. These are tough, rugged people who have wolves as companions. They are an honorable sort. (Spoiler alert: A favorite character, Eddard “Ned” Stark was like a King-in-waiting until he was killed in the season one finale. So in Game of Thrones — even your favorite characters can die.)

Another house to take note of is the royal House Baratheon, where Queen Cersei lives with the new king (her son by her brother; a wicked tween — yes you read that right). What you need to know is that the former king ruled for 15 years and she is a conniving queen and manipulated her son into sitting on the Iron Throne.

House Targaryen also had some brother-sister stuff going on and they are very close to dragons. They also have very white hair.

House Lannister (the Queen’s house before she married the King) holds one of the most powerful and oldest families, “the Lannisters.” They are a fun bunch to watch, including the legendary Tyrion (Emmy nominated Peter Dinklage).

Winter is coming and hasn’t come in years. None of the Stark are safe from Queen Cersei Lannister. The youngest, Bran, was pushed out a window after learning her “secret.” He survives but can’t walk. Stark’s eldest son Robb wages war to avenge his father Eddard’s death. An honorable son from House Stark, Jon Snow serves as the Night Watch living a monk-like existence guarding “the wall” (beyond the wall are wild lands that hold mythic zombie-like creatures).

The season ends on a Princess-in-waiting, Princess Daenerys of House Targaryen, as she comes into her own by stepping into her own funeral pyre (after having thrown a witch on it) and hatches some dragon eggs.

HBO provides a 22-minute recap of season one: