Hey y’all, the good Christian b*****s did not disappoint this week! This was by far my favorite episode of the season — I think it was because Gigi was very present throughout the night! 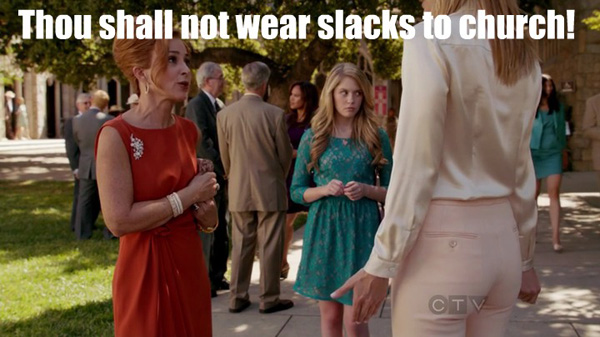 Amanda committed a cardinal sin by wearing slacks to church and everyone but the men and boys were embarrassed for her! 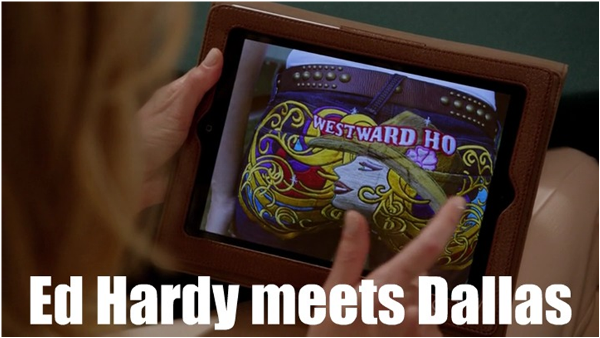 Blake, the only guy not staring at Amanda’s derrière, notices instead that she wears a pair of pants well. He decides to offer her a consulting job with his company as they bring back a retro brand of jeans — Westward Ho, aka the worst name for a brand of jeans ever. 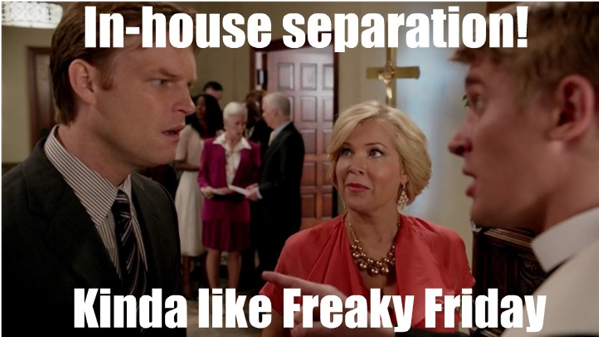 Zack and Sharon still aren’t on very good terms and the hot preacher decides the best therapy for them would be to switch roles so they will appreciate each other. 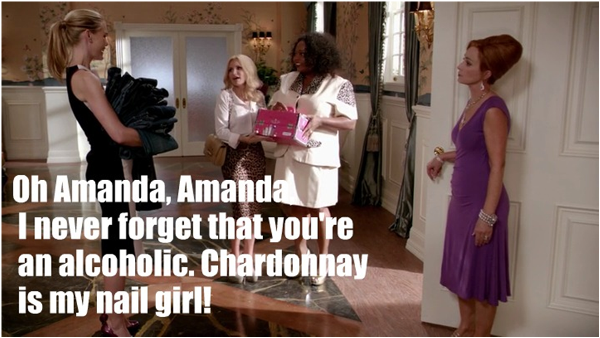 Ripp encourages Carlene to befriend Amanda so she can find out if Bill is still alive. Carlene brings over Chardonnay to make nice, and Amanda is so frustrated that no one can remember that she doesn’t drink! Not to worry — Chardonnay is just Carlene’s nail girl! 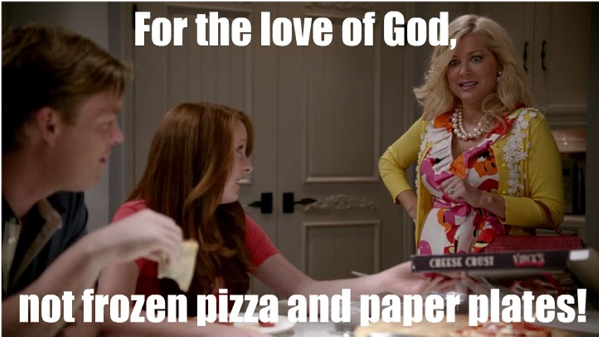 The hot preacher’s therapy isn’t going too well when Zack and Sharon’s daughter actually prefer the low-maintenance way of life without Sharon’s efforts. I just feel so badly for Sharon! 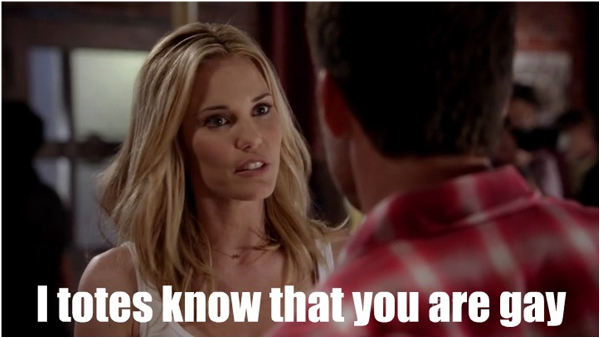 When models are in short supply for a Westward Ho photo shoot, Amanda arranges for the photo shoot to be held at Boobylicious and the waitresses can model! Amanda also hints to Blake that she knows about his lifestyle and she’s totally OK with it! 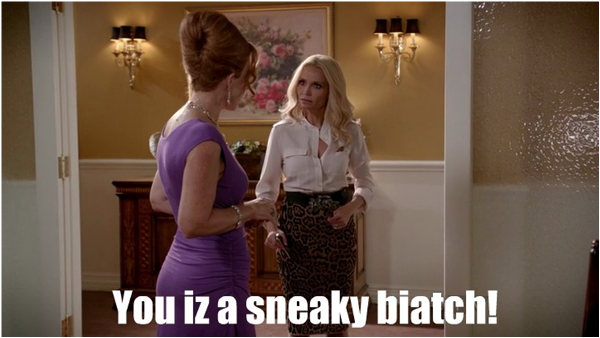 Carlene tries to snoop through Amanda’s belongings and Gigi catches her in the act! 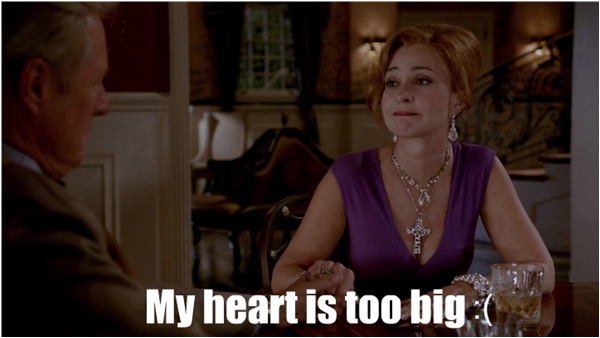 Carlene’s uncle Burl, Gigi’s best friend and I’m guessing soulmate, is back in town after spreading Bibles all over the world. 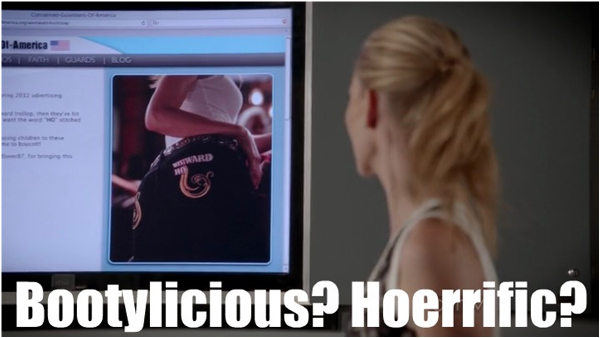 He lets Gigi know that his heart might give out soon and he wanted to be near her toward the end — even though he’s married to Gigi’s enemy Bitsy! 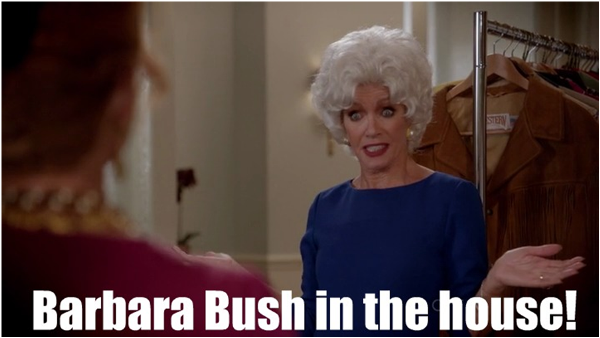 Remember the Boobylicious photo shoot? Some unknown blogger released the photos to the public and casts a negative light on the brand’s re-release — no religious person in their right mind would ever buy these Jezebel jeans! 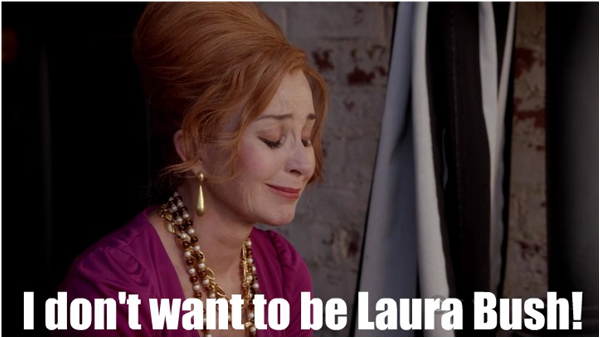 Burl urges Gigi to bury the hatchet for him and dress up with Bitsy. Gigi loves Burl so she decides to go along with the plan, even though she reallllly doesn’t want to dress up as a librarian! 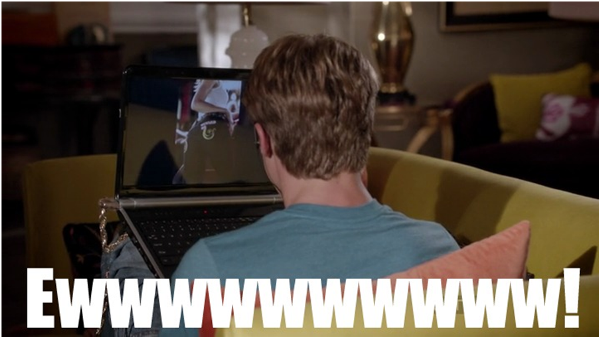 Carlene finally steals Amanda’s laptop, which should hold the answers to a lot of Ripp’s questions — but she comes home and finds her son pleasuring himself to a photo of Amanda’s behind in Westward Ho jeans. Carlene immediately takes this as a message from God to stop interfering in Amanda’s business and return the computer. 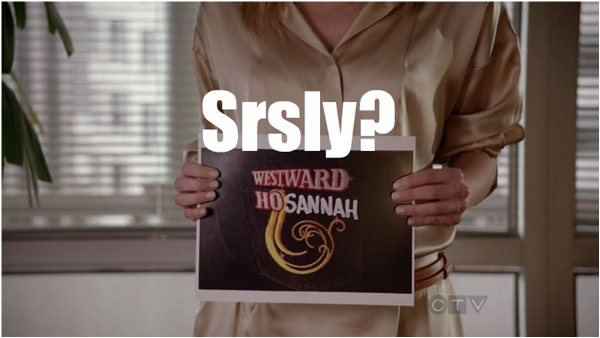 Amanda solves the religious problem by changing Ho to Hosannah in what might be the worst jean company name of all time. She also put in a call to Andrew, Heather’s geeky millionaire boyfriend, to see if he can find the identity of the blogger. 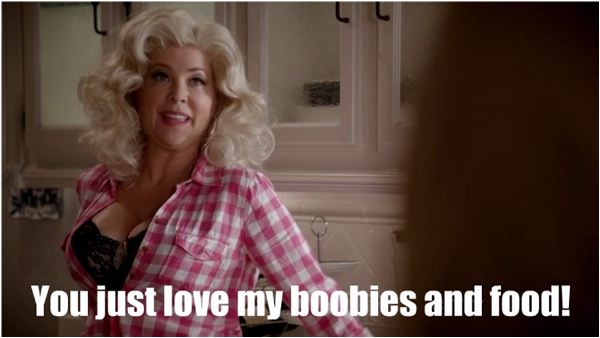 Just when it seems like Zack had realized the error of his ways and had finally appreciated everything Sharon does for him — Sharon, as Anna Nicole Smith, has a revelation and understands that all this exercise taught him is that he misses her cooking! 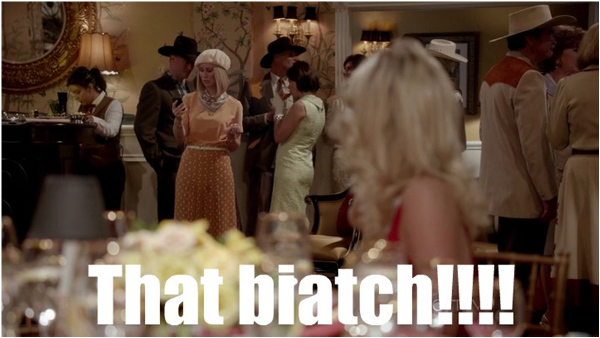 Andrew finally gets back to Amanda and reveals the cell phone number of the mysterious blogger that was trying to ruin Westward Ho. Amanda calls the cell phone and Cricket picks up! Amanda is just beside herself that Cricket would risk ruining her company just to prevent Blake from getting close to Amanda! 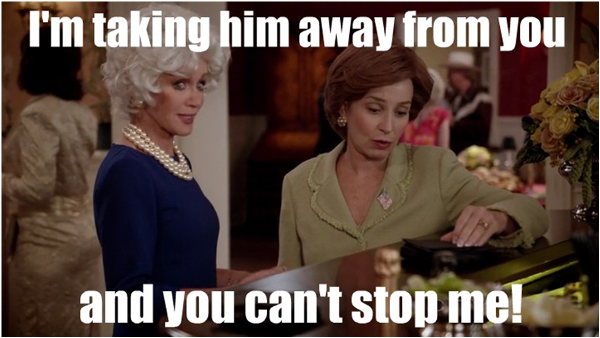 Bitsy reveals to Gigi that she’s taking Burl away on the yacht to spend his last days away from Gigi, who she believes is trying to take Burl away from her! Gigi has had it with this devil-woman and the Laura Bush outfit she had her wear — she promptly goes to change and pray! 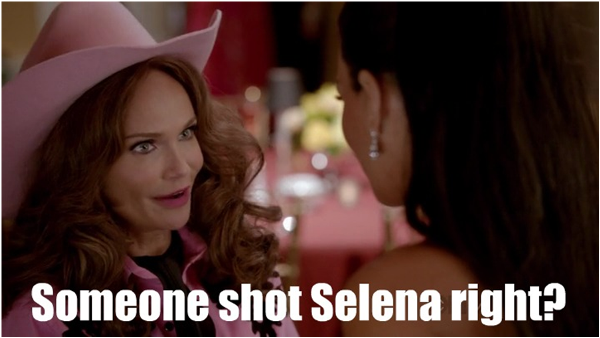 Anyone else feel like Heather gets the worst storylines of the show? She’s so pretty but they are making her sooooo boring! Turns out, she finagled Burl out of a piece of land he was going to sell to Carlene so Andrew could move his business to Dallas. Carlene obviously wasn’t happy about this! 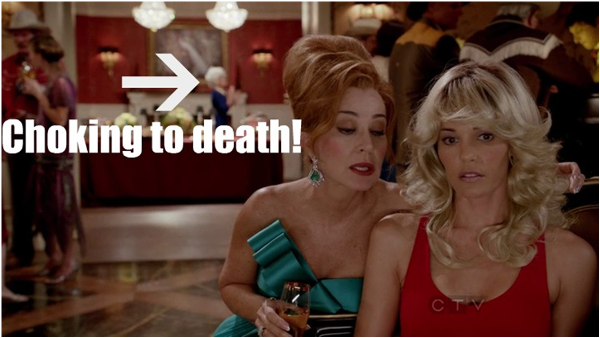 Amanda tells Gigi about Blake and Cricket’s marriage and Gigi explains why Amanda was such a threat to their relationship while Bitsy is choking to death in the background. Amanda informs Blake and Cricket that she doesn’t think she should work with them anymore! 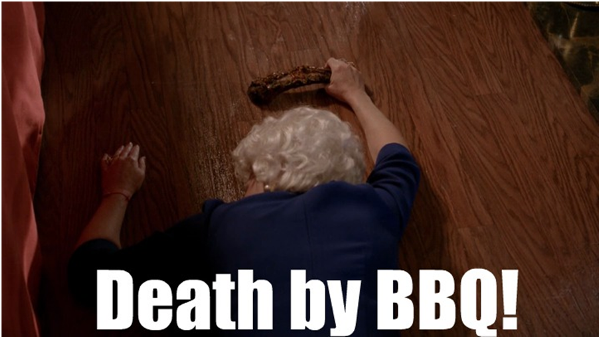 Then Cricket discovers the dead body of Bitsy! Guess all that praying Gigi did really worked in her favor? Guess there will be a GCB funeral next week and you know it’s going to be ridiculous!!! I can’t wait to see all the big hats!

Best quotes of the night:

“Only one man does magic, and he’s from Jerusalem, not Hogwarts.” — Carlene

“We know she’s got a password. It could be anything. Atheist, liberal, Obama, who knows?” — Carlene

Photos courtesy of ABC; photo edits made by the author