Glee is amping up the remainder of season three with some high-profile guest stars. Check out the upcoming role of Whoopi Goldberg and, potentially, Lindsay Lohan! 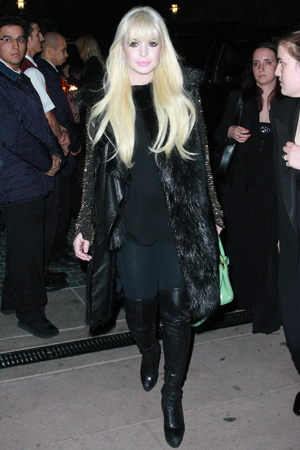 The third season of Glee has already been sprinkled with showstopping guest stars, including Spanish teacher Ricky Martin and swim coach NeNe Leakes of The Real Housewives of Atlanta. Jeff Goldblum of White Collar will soon appear as Blaine Anderson’s older brother, and Thomas Calabro of Melrose Place has just been cast as Puck’s deadbeat dad.

So who’s set to close out the season?

Gleeks can now add Whoopi Goldberg to the list! Sources confirm to TVLine that the Oscar winner and host on The View has signed on for three crucial episodes.

Goldberg will play Carmen Tibideaux, a theatrical legend and a professor at New York Academy of the Dramatic Arts (NYADA). She will travel from NYC to Ohio to proctor Kurt and Rachel’s auditions for the prestigious collegiate program. The first of her guest spots is set to air on May 1.

Even more so, the show is currently in final negotiations with Lindsay Lohan to guest star as well! TVLine reports that the star is solidifying an appearance as a celebrity judge at nationals. The hilarious spot on the panel has previously been played by Josh Groban and Olivia Newton-John. We can’t wait!