It’s official — after much negotiation, Britney Spears is out of the running for a seat on The X Factor judges’ panel! So whose name is bouncing around now? 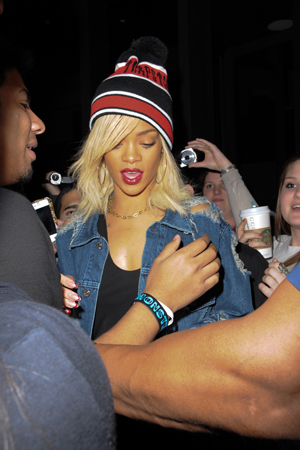 The ’90s pop music fan in each of us got a little excited when we first heard that Britney Spears was in talks to secure a seat alongside Simon Cowell on The X Factor. We didn’t even get that upset when her payday negotiations came close to $10 million and asked for a special “out” clause in her contract. We were just excited to potentially see her twice a week, every week, on the hit show’s second season.

Unfortunately, that bubblegum dream must be popped. According to HollywoodLife.com, Britney Spears is officially out of the running to become a judge on the show, with an inside source whispering that her discussions with producers on pending negotiations are “pretty much dead.”

Even more so, the insider also shares that next on the list to approach is none other than Rihanna!

The source states that negotiations have started for the controversial “Birthday Cake” singer to be added to the show. (We know Gene Simmons of KISS definitely wouldn’t be happy to see Rihanna in a position as a musical mentor, as he recently crowned her the queen of karaoke!)

Earlier this month, show creator Simon Cowell did admit that a few new names were in the running:

“I can’t confirm or deny anything right now. The truth is, we are talking to a number of people. It changes on a daily basis to be honest with you,” he said while on Good Day New York. “You think you’ve made your mind up, then last night, two other people threw their names in the hat — one a very famous singer, one a very famous actress — and you gotta talk to everybody.”