Whether you read the book or not, the ethnicity of the characters in the movie shouldn’t be an issue. However, too many racist Hunger Games fans have a problem. 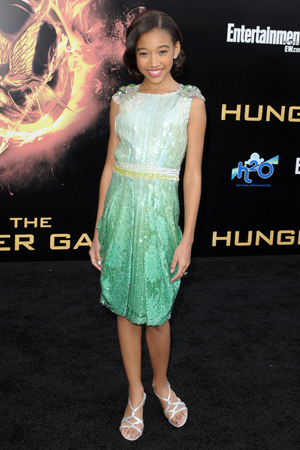 Which actors are being attacked for their roles in The Hunger Games? Sad to say, it’s Lenny Kravitz and Amandla Stenberg for their portrayals of Capitol stylist Cinna and angelic District 11 Tribute Rue.

Actually, it’s because they’re of African American descent and playing these characters on screen. And countless Hunger Games fans took to Twitter to express their disappointment to the filmmakers about why they were cast at all.

But since the film’s release, the page has become a place that republishes hateful tweets about the film’s African American characters.

One tweet reads, “Why does rue have to be black not gonna lie kinda ruined the movie.”

Played by 13-year-old Stenberg, the physical description of Rue is actually described in the book by Collins as having “dark brown skin and eyes.” Early speculations thought she may be played by an actress of Indian descent. Not that it should matter anyway — Amandla Stenberg was amazing in the film and brought both laughter and tears to audiences everywhere.

Except a few, apparently. One user admits, “Call me racist but when i found out rue was black her death wasn’t as sad #ihatemyself.” Ahh yes, that is racism!

Another tweet attacks Kravitz as Cinna as well: “Cinna and rue werent suppose to be black… why did the producer make all the good characters black.”

Many of the accounts have reportedly been deleted since being exposed on the Tumblr page. We’re hoping they’ve learned their lesson by now.