Nearly half a million people aren’t happy with the MPAA’s attempt to give the film Bully an R rating. Their voices have been heard, and now the film is making the unusual choice to remain unrated! 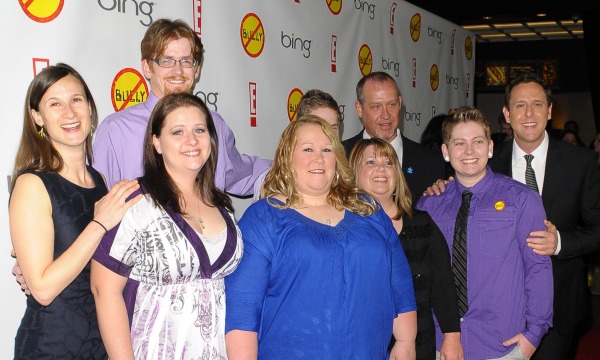 The movie Bully is poised to go from “this film is not yet rated” to “this film shall never be rated.” Fed up with the MPAA’s ruling of an R rating for the documentary that highlights the issue of bullying in schools, the Weinstein Company has announced it will release the film with no rating at all.

How a bully can change your life >>

“The small amount of language in the film that’s responsible for the R rating is there because it’s real,” Bully director Lee Hirsch, seen at the far right in the photo above with families featured in the documentary, said in a statement Monday.

“It’s what the children who are victims of bullying face on most days,” he continued. “All of our supporters see that, and we’re grateful for the support we’ve received across the board. I know the kids will come, so it’s up to the theaters to let them in.”

The petition to change the rating of Bully was started on Change.org by a Michigan high school student named Katy Butler. The movement gained incredible momentum after celebrities such as Ellen DeGeneres, Meryl Streep, Johnny Depp, Justin Bieber and more showed their support. To date the petition has nearly half a million signatures!

“The brief use of explicit language in this film reflects what so many kids hear each day in school when they’re being bullied,” Katy Butler explained of the language controversy in a statement. “The MPAA said they wouldn’t drop the R rating unless this language was removed, but nothing can remove it from the halls and playgrounds of schools where bullied students hear it each day, except education and exposure.”

Is releasing Bully unrated a win against the MPAA?