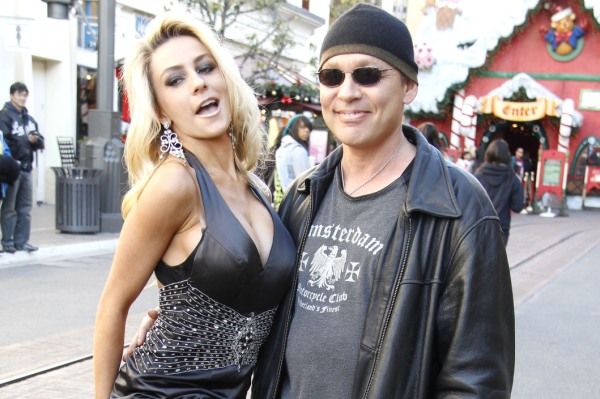 Courtney Stodden is, you know, speaking out on behalf of PETA to encourage everyone to stop eating meat. The teen bride showed off her trademark cleavage and a few linguistic quirks in a new promo for the group, you know, the People for the Ethical Treatment of Animals. You know?

The video, available for curious eyes here, features not only Courtney Stodden holding her pooch, but scenes of animal cruelty cut into her narration. Viewers be warned!

Courtney Stodden strips down for Funny or Die video >>

The 17-year-old wife of 51-year-old actor Doug Hutchison shared her deep thoughts about going vegetarian, pride in never having swallowed a hamburger in her short life, and a plea for others to consider going vegetarian for the sake of the animals. Courtney Stodden’s video narration reads:

“I believe that there are so many animals in you know, shelters, that need homes. So if I’m going to welcome another, you know, companion into our home I would suggest going to a shelter and not only make them happy and live a healthy life, but save a life as well.

Well, growing up I always had a love for animals and I wasn’t really fond of eating meat or anything with a face because I just felt like it was an awful thing to do.

So just recently I switched to a vegetarian. I had my first Thanksgiving being vegetarian… I had a vegan dish… I never had a hamburger in my life soooo… I’m so glad I can say that. I never want to eat a hamburger.

You feel better, you know, within yourself, because you know that you’re not only saving animals you’re also helping the environment.

We really need to be the voice for them and help save lives that are going to be, you know, slaughtered.”

It’s been a rough week for PETA, who was dumped by Khloe Kardashian for their support of Kim Kardashian’s flour-bombing. Losing Khloe and gaining Courtney — it’s not exactly what you’d call an upgrade, is it?

By the way, Courtney, we hope that’s not a leather jacket your hubby is wearing in the photo above from December!

What do you make of Courtney Stodden joining on with PETA?