This past Sunday was a big night for Jessica Paré — not only did Megan Draper debut as a married woman, but she also sang AND took Don down in the living room! 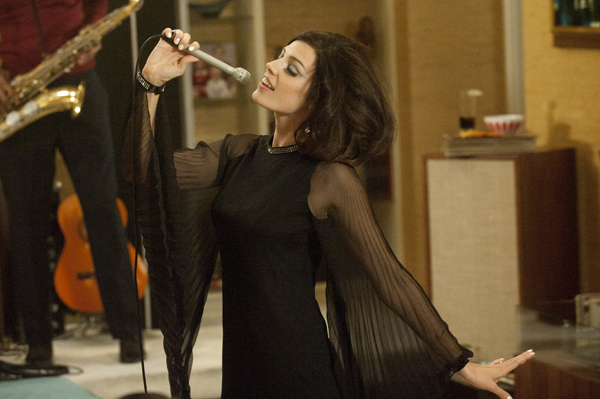 After Sunday night’s two-hour premiere, everyone is wondering about the woman who plays Megan Draper on Mad Men! Her name is Jessica Paré, and the first episodes of season five had her character saucily singing “Zou Bisou Bisou” to her husband and having amazing make-up sex with him on their new living room rug!

“I just was like, ‘I can’t believe I’m new on the show and the first thing I have to do is an entire song-and-dance routine for the whole cast of Mad Men!'” Paré said, according to E! News. “That’s really intimidating!”

Not only would she snag some serious screen time, but she also had to record the song itself. “Well, I listened to it a whole lot, and Matt [Weiner] gave me some pretty comprehensive notes to go along with it,” she explained. “Then I got to go into a real grown-up recording studio and actually sing a song like a professional, which was an amazing opportunity.”

Paré shared that she’s never had any kind of professional singing training. “I sing around the bonfire, in my car, in the shower and that’s about it. I think I have a bit of a rock fantasy, which I guess a lot of us do, so it was a thrill and a gift to go and professionally record a song.”

That wasn’t the only exciting season five premiere scene to shoot — she also stripped down to her knickers to scold Don Draper for being ungrateful for her musical performance and his entire birthday party.

“Is there really any problem that can’t be solved that way?” Paré joked of the hot sex scene that followed their fight.

However, she warns that their marriage won’t be perfect for long. “Of course, it’s not a show about people who have everything that want and are just happy. Obviously, there will be some friction between them. I think the seeds of it are pretty well sown in this first episode,” she explained. “Definitely, she’s a lighter person. She has more light to her than most of the characters. There is a lot of sarcasm and darkness in his character. We’ll definitely see some more of that.”