Fans of The Hunger Games are already antsy for the trilogy’s next film. What will the cast be feasting on before reuniting to film the sequel, Catching Fire? 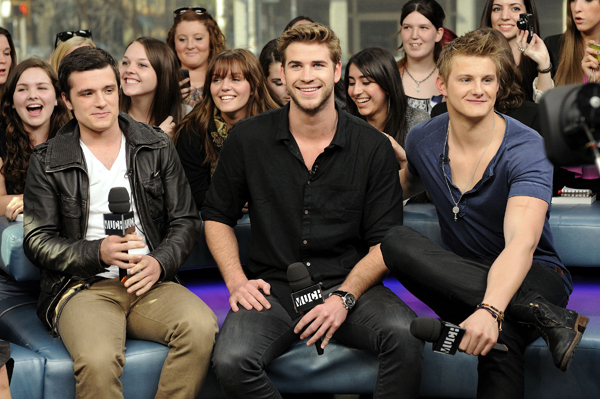 It’s official: The Hunger Games has already broken box office records with the biggest opening weekend for a non-sequel! Will the movie be outsold by its own sequel in November 2013? Not even the stars are sure, since Catching Fire should begin filming later this year.

But such an intermission won’t necessarily be a time of rest, according to The Hollywood Reporter. Katniss’ Jennifer Lawrence can soon be seen in the horror thriller House at the End of the Street, and then in The Silver Linings Playbook alongside Bradley Cooper and Robert De Niro in November. She also begins production next month on the period drama Serena, and will likely shoot a sequel to X-Men: First Class before “catching fire” with the rest of the cast.

Josh Hutcherson, who played Peeta Mellark, also has a horror film up next called Detention. He stars in Red Dawn (set for release in November) and is also likely to return for a third Journey to the Center of the Earth film. Liam Hemsworth may have only snagged bits of screentime as Gale Hawthorne, but he does have The Expendables 2 in August. Miley Cyrus’ beau is also attached to crime drama Empire State and a version of Arabian Nights — we can’t wait for that one!

It’s also a big year for the Effie Trinket actress, Elizabeth Banks — she stars in the ensemble pregnancy comedy What to Expect When You’re Expecting in May , the drama People Like Us in late June and The Details in September. Not to mention her producer role in the musical comedy Pitch Perfect.

Woody Harrelson is currently taking a break from playing Haymitch by filming the heist thriller Now You See Me, also featuring Michael Caine, Mark Ruffalo and Jesse Eisenberg,  which is scheduled to hit theaters in January 2013. And the little Everdeen sister, Willow Shields, can be spotted next in an episode of the upcoming third season R.L. Stine’s The Haunting Hour.