Miley Cyrus made a genius move to drum up publicity for her boyfriend Liam Hemsworth — and now she is addressing those engagement rumors on Twitter. Read on to find out what she had to say. 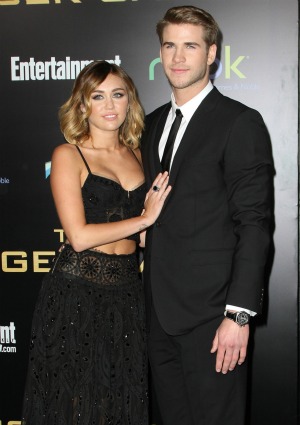 Want a little extra publicity for yourself and your boyfriend, who just happens to be co-starring in what’s being billed as the biggest movie of the year? Better start prancing around town with what looks like a diamond ring on that finger.

Just in time for opening weekend of The Hunger Games, Miley Cyrus set tongues wagging when what appeared to be a diamond appeared on her left hand. First the star posted a photo of her new manicure on Twitter with the ring prominently displayed but not mentioned, then she was seen rockin’ that rock on the red carpet all weekend.

Cyrus, who has been in the biz since she was a little kid, knows how the publicity machine works and knows how to raise the profile of herself and anyone connected to her — so it looks like she threw her man Liam Hemsworth a solid by sending a little attention his way.

But of course, one can never admit to such silly manipulations, so Cyrus went on Twitter to pooh-pooh the rumors of her so-called engagement this morning.”I’m not engaged,” she wrote. “I’ve worn this same ring on this finger since November! People just wanna find something to talk about! It’s a topaz people!”

Cyrus and Hemsworth have been on again, off again since 2009 and while the young twenty-somethings might not be ready for a step as serious as marriage, they have sealed their commitment in another way: They share a dog together.

The Buzz: Miley Cyrus engaged? As if!