Kim Kardashian was not amused by the flour bomber who attacked her on the red carpet last week — but PETA thought it was hilarious! See what the group had to say about the incident and how they plan to help the bomber. 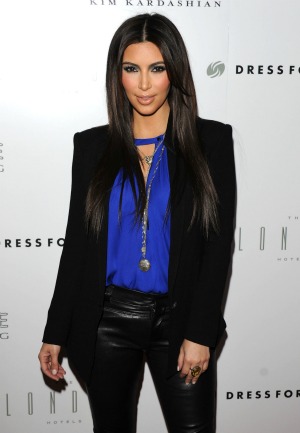 PETA claims they had nothing to do with Kim Kardashian getting flour bombed on the red carpet last week — but they stand behind the anti-fur activist who did it.

A video of the flour bombing was posted on PETA’s website shortly after it happened — but the group said it was sent to them unsolicited. However, they applaud the actions of the flour-wielding bandit and say they hope it will open Kardashian’s eyes to the horrors animals undergo to provide her with tacky fur vests.

Kim Kardashian gets under PETA’s skin >>

“Maybe this rude awakening will finally prompt Kim to consider how animals are anally electrocuted as well as bludgeoned and skinned alive so that she can drape their pelts across her back,” the organization said in a statement on their website. “Kim has been sent PETA’s fur farm exposé and should know full well the torture that animals endure.”

“PETA has written polite letters to Kim, erected billboards and held protests. While we weren’t behind the flour delivery, we applaud the animal advocates who were. Hopefully a dusting with flour will cause her to take her head out of the clouds and recognize the blatant cruelty to animals that she promotes.”

While the reality star originally said she wouldn’t press charges against her attacker, she has since waffled and said she very well might after all — and PETA will stand behind her attacker financially if that happens.

“We don’t believe Kim would be so shortsighted as to go after this woman. But if she does, we’ll definitely look at how to maximize exposure to the cruel fur industry, and that could mean defending the activist if she wishes,” the group told E! News.