Leg? What leg? Despite being mocked for her awkward Oscar pose on a global scale, Angelina Jolie says she simply has no time to pay attention to such nonsense. 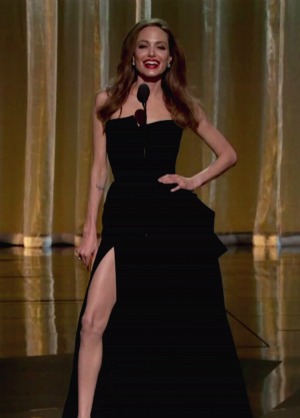 Angelina Jolie said she doesn’t pay attention to the jokes us peasants make about her awkward posing skills.

Jolie’s Oscar pose got immediate attention both off-screen and on, with screenwriter Jim Rash mocking it immediately upon taking the stage after the actress.

In an interview with The Huffington Post, Jolie spoke of the Angelegging sensation — which spawned a host of memes and its own Twitter handle — and said she doesn’t watch or read such triviality.

“I honestly didn’t pay attention to it. You know what I mean?” Jolie said.

“I don’t watch those TV shows and if I go online and see something about myself, I don’t click on it. And the people I surround myself with don’t really talk about that kind of stuff.”

Oh come on. Can she honestly sit there lying to our faces and say she had no idea everyone on the interwebs was mocking her ridiculous pose?

“I heard something,” she finally admitted, “but I didn’t pay any attention. It’s as simple as being a woman picking a dress you like and having a night, and not really thinking about anything else.”

Right. We might be able to buy that excuse if she only struck her silly pose on the red carpet, but also doing it while presenting at the podium is just ridic, and obviously calculated.

Perhaps her reluctance to own up to the Great Leg Caper has to do with the fact that she’s actually rather pissed about the whole situation. A source told Grazia Magazine, “Angelina can’t believe that she is now the butt of everyone’s jokes — and on such a global scale. She feels completely humiliated. She simply can’t believe that her appearance backfired so spectacularly. Angelina never looks uncool — ever.”