Bully tells the story not of five bullies, but of five families who have been their victims. Each story is as heartbreaking as it is confounding. 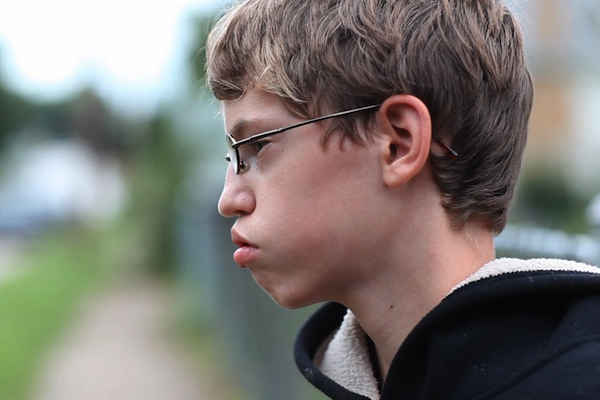 Bully isn’t an easy film to watch. My heart broke in the first few minutes with the story of the Long family whose son Tyler simply could not take the bullying anymore. After showing some adorable home videos of a sweet, lovable boy, we see the parents laying flowers on their son’s grave. Tyler took his own life.

One way the film tells Tyler’s story is by videotaping the journey of another victim of bullying, 12-year old Alex in Iowa. Alex says, “I like learning, but I have trouble making friends.”  A gentle, meek boy, Alex has begun to consider the boys who choke him, call him fish-face and stab him with pencils his “friends” which concerns his parents enormously. Alex is bright and it appears as if there’s a part of him that knows these kids aren’t his friends, but it almost seems that for Alex to admit he has no friends would be much worse. He confides into the camera, “I feel like I belong somewhere else.” Yes, Alex, you do. But where?

The relationship between learning and making friends has long been intertwined, but mostly assumed they would go hand-in-hand. It’s common for young people to say that the best part of school is hanging out with their friends. But when that friend “piece” is missing, school can become a true horror show and Bully captures many of those chilling moments that may make you want to yell at the screen. Yes, children can often be cruel, but some of the educators interviewed in the film seem to either underestimate the effect these bullies are having on their victims or worse, appear to be in denial that this is a serious problem.

Kelby, a teen lesbian in Oklahoma, admits to not only getting run-down by a minivan and having kids afraid to sit near her, but also hearing teachers in the classroom speak of wanting to “burn f**s.” A note to the MPAA — the foul language in this film isn’t what’s offensive. It’s the lack of ability to address this problem that is truly shocking.

Many of us watching the film have most likely been on both the receiving and giving end of bullying. Most of us hopefully had that moment of courage where we stood up to the bully and managed to change the dynamic. Certainly most parents and public school administrators don’t think adults should fight all their children’s battles, but not all kids are equipped with the resources to stand up and protect themselves. This is a movie about those kids. And about how schools, families and communities need to protect them.

Alex’s mother recalls that when she was a child, if any kids on the school bus got out of their seat, the bus would pull over until all the children were settled — and safe. Apparently, things have grossly changed for the worse, considering the movie captures teens hitting, insulting and smashing Alex’s head against the seat while on the school bus — and this is only what was caught on camera. The school administrator’s solution? Put him on a different bus. This is a clear lack of desire to address the true problem. Why? The answer isn’t clear.

Bully is an excellent exploration of what happens — and could happen — to victims of bullying. But, as many documentaries do, it asks more questions than provides answers. With Facebook, sexting and other cyber methods available to children to hurt each other, it is clear school administrators are playing “catch-up” with this issue. But shouldn’t ensuring the safety of a child on a school bus be something our society has been able to figure out by now? After the MPAA gave the film an “R” rating for its language and violence, the Weinstein Company (who had a similar language issue when releasing Oscar winner The King’s Speech) has decided to release the film “unrated” hoping the under-17 crowd will see the film Bully. This may, however, cause many smaller movie houses not to show the film at all.

Bottom line: Bringing audiences to see Bully is the best way teens like Tyler Long may get their story heard. Thank you, Lee Hirsch (the doc’s director), for bringing this film into the cultural zeitgeist at a time when it is needed most.