Why is it that Elizabeth Banks gets all the crazy Capitol fashion as Effie Trinket, while Hunger Games stylist Cinna is simply dressed? Kravitz weighs in. 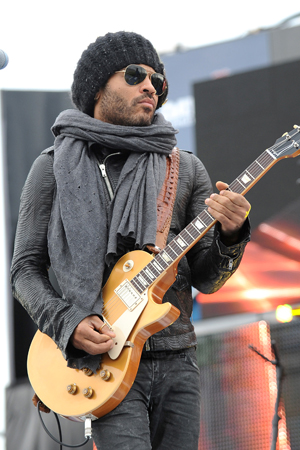 We’re not the only ones crazy about Capitol-inspired fashion! Seasoned rock ‘n’ roll stageman Lenny Kravitz admitted that Cinna’s gold eyeliner didn’t even come close to the painful yet amazing outfits of Effie Trinket and Seneca Crane in The Hunger Games.

“I couldn’t compete with that,” he told People. “But I was jealous as me, Lenny Kravitz, the person who likes to wear things.”

Kravitz actually contributed to the vision of Cinna’s look and opted for a much less avant-garde approach. “Cinna basically wears waistcoats, shirts and slacks, and he’s very clean,” Kravitz said recently at a Los Angeles event for the film. “The goal is his touch of The Capitol, his touch of glam, but he’s more subdued.”

Such an idea wasn’t what people expected for such a stylish character, the one who transforms Katniss into the girl who was on fire. “When I told friends that had kids that I was doing this film and playing Cinna, they were like, ‘Oh, yeah, he’s like super flamboyant and super out there,'” he recalled. “The first question I had to get was, ‘How far do you want to take this?’ Was this going to be like The Fifth Element? Was I going to be like Chris Tucker? What was it going to be?”

However, Cinna’s look references today’s big-name designers and fashion icons. “We discussed it and thought that it would be really interesting to pull him back and make him more like a Tom Ford or an Yves Saint Laurent,” said Kravitz. As long as we still get to see his gorgeous face, we’re not complaining!