Jonathan Cheban had some words of advice for flour bomb victim Kim Kardashian. How would he know? He had to (literally) dust off the haters, too! 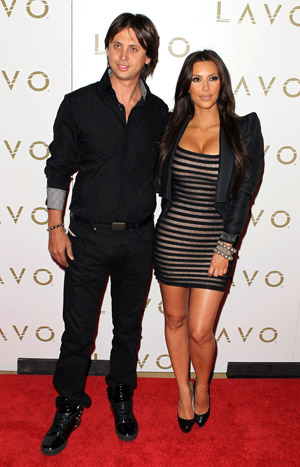 Kim Kardashian doesn’t have to go far to find someone else who has been attacked with flour: Her BFF, publicist Jonathan Cheban, was also hit with the white stuff back in December. Now, he’s speaking out on the latest incident involving his pal.

“I think it’s pathetic and humiliating for any cause to do something that childish,” Cheban told Celebuzz on Friday morning. Cheban was doused near the NYC Dash store in retaliation for Kardashian’s divorce from New Jersey Nets player Kris Humphries.

Initially, people suspected that the flour bomb was courtesy of PETA, especially since Kardashian’s assailant allegedly made a remark about fur before the bomb. Though they’ve been more than vocal about their displeasure over her fashion choices, a rep for the organization denies they had anything to do with it.

“PETA has tried everything from polite letters to public protests, but Kim Kardashian has not been moved by the news that animals are beaten, electrocuted and even skinned alive for real fur garments. Whoever threw that flour may reach her when our polite appeals did not.”

The Buzz: Kim Kardashian gets bombed


Kardashian kept a positive attitude about the whole thing, even declining to press charges against the woman responsible.

“That probably is the craziest, unexpected, weird thing that ever happened to me,” Kardashian joked to E! News. “Like I said to my makeup artist, I wanted more powder and that’s a whole lot of translucent powder right there.”

Really, what else can you do in a situation like this? Well, Khloe Kardashian would probably have a few other methods of protest. “I wish I was with my sister tonight,” she tweeted on Thursday night. “I bet you that woman wouldn’t have dared tried a thing…”

Guess Kim just has to chalk this one up to an occupational hazard, huh?