He may not have been crowned the winner while on Project Runway the first time, but Mondo Guerra won the ultimate fashion challenge — Project Runway All Stars! 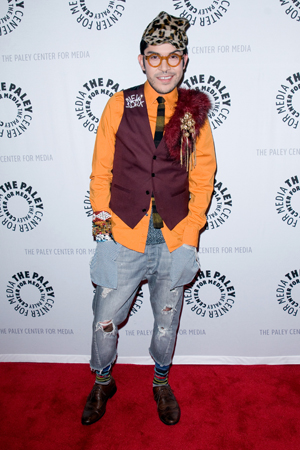 Congratulations to the winner of Project Runway All Stars: Mondo Guerra! He may have returned home discouraged after competing on Season eight, but this fashion designer came out on top in last night’s All Star finale — and the good news has been hard for him to keep a secret for so long!

“Oh my God, yes. It’s insane. I’ve been sitting on this information forever,” the winner told The Huffington Post. “And people have no shame: They will come up to you on the street and ask, ‘Did you win?’ And you’re like, ‘Awkward.’ It’s so good that it’s all out.”

He also recollected what it was like to win the competition. “In the moments before, I was breathing and trying to stay calm and was so nervous. And then when they announced [the winner], it took me a moment. What they didn’t show was that I looked up at the ceiling and let go a yelp and I don’t know where it came from.”

Now that all the episodes have aired, Mondo admitted it was odd to watch some of his most vulnerable moments of the season on television.

“Yeah. That’s kind of scary,” he said. “Especially the week before [this final episode] was really hard for me because they showed a different side of me. It was about me having to take a moment to get away from it all, so I shut my door. You put yourself out there for viewers to scrutinize who you are, even though at the end of the day, it’s about my design work. We forget that we’re all just human beings.”

However, he was also happy to celebrate his high point with all of America. “My favorite moment was going into the finale with Michael,” said Mondo. “I was called first and Austin was called second. We knew it would either be Kenley or Michael and, when Michael walked through the door, I was so happy for him. Michael is such a positive person. He really learns from his experiences and he did such a wonderful job this season. He’s such an amazing guy.”

In fact, the two “competitors” still remain close. “We text and talk every day. I actually talked to him this morning about the little behind-the-scenes things we cherish and keep to ourselves. We’re kind of therapy for each other. We did the show together two years in a row.”

So how is Mondo handling the largest prize in Runway history? “In terms of the money, right now, I’m just letting it sink in. I may take a bit off the top for a little bit of a vacay. I’ve always wanted to go to Spain,” he said. “After I won the avant-garde challenge on Season eight, I bought myself a really nice Louis Vuitton bag that I always wanted and I would never have been able to afford. I arrived with $14 in my bank account, so this has come full circle. It sounds cheesy, but Project Runway saved my life. It really did change my life.”