Want a sneak peek at The Carrie Diaries? We have the first image from the upcoming CW show featuring show star AnnaSophia Robb. Check out her fab Carrie wardrobe! 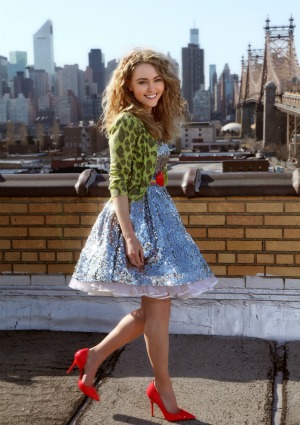 What was Carrie Bradshaw like as a teen? A newly-released image from the upcoming Sex and the City prequel The Carrie Diaries gives us a peek! Hint: She is so totally ’80s — and her wardrobe has always been fab!

AnnaSophia Robb is set to star as Carrie Bradshaw in the upcoming show, and writer/executive producer Amy B. Harris said the casting choice was a no-brainer.

“The search for Carrie Bradshaw was an exciting adventure. Having been a part of the Sex and the City series, I felt such an honor and responsibility to the fans of the show to find someone who embodied the spirit of Manhattan’s favorite ‘It’ girl,” Harris said.

“When AnnaSophia Robb walked into the room, we knew we had found her. Her grace, intelligence, sense of fun and her empathetic nature make her the perfect girl to bring our young Carrie to life. The fact that she loves a gorgeous pair of heels doesn’t hurt either.”

Sex and the City fashion scrapbook >>

“It’s a rare invitation to dress a character whose reputation truly precedes her,” Daman said. “Having played a hand in designing for the Carrie we know and love, I am honored to be chosen to carry the torch — to illuminate the woman we know by discovering the young lady she was.”

We know this show is geared to teens, but we’re so psyched to watch it!