Fans are excited to reunite with the entire cast of Mad Men, but one key character is missing from both of Sunday’s new episodes — where’s Betty? 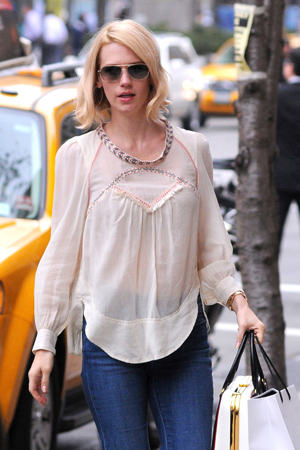 Major spoiler alert! Betty Francis, the character formerly married to Jon Hamm‘s Don Draper and played by January Jones, is missing from Mad Men. She doesn’t appear in either of the two highly anticipated episodes that will air on Sunday — not even once! Is Betty being written out of the show?

In an interview with The Hollywood Reporter, Jones explained she “wasn’t hurt at all” about it and added, “It was organized that way.” What is she talking about?!

One thing we television fans always seem to forget: Though we’re so excited about the characters they play, even actresses deserve a little maternity leave too! Jones was pregnant with Xander when season five filming began, and Jones worked with show creator Matthew Weiner to get some scenes done before she gave birth.

“We went back to work a lot longer ago than everybody else,” Weiner said. “We wanted to accommodate her. She has a very modern situation. Way more modern than Betty Draper. We accommodated her work life, and we’re just so happy for her. And so she got to go off and have her baby, take her maternity leave, and come back to work. We actually shot some of the things out of order, not just the first episode but later episodes, like scenes and things like that when she was able to come back to work.”

Though all of this is true, Jones entertained another reason why Betty doesn’t make any of Sunday’s scenes.

“I think, creatively, Matthew just wanted to f*** with people, basically, and have them wonder where Betty is because there was so much going on about how we were going to shoot it because I was pregnant when we first started the show this season,” she said.