Erika Van Pelt let Tommy Hilfiger talk her into drastically cutting and dyeing her hair on Tuesday night’s American Idol. How did fans repay her for her hair sacrifice? They voted her off the show. 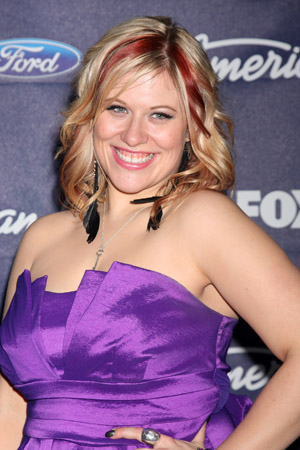 American Idol judges praised finalist Erika Van Pelt when she performed “New York State of Mind” on Tuesday, calling her one of the best vocalists on the show.

“Listen, you can clearly sing the phone book, that was beautiful there too,” judge Randy Jackson told the big-voiced singer. “Those who can do should and those who can’t do shouldn’t, right?… You can go to some runs [at the end of the song] and take those liberties because you can do that.”

She also impressed with her willingness to take designer Tommy Hilfiger’s advice and cut her mid-length, blonde hair into a short (and Kris Jenner-esque) black cut. So, she was probably safe during Wednesday night’s results show, right? Nope.

“The voters just weren’t rallying behind me,” she told The Wall Street Journal. “I think it’s a combination of a couple of things, but certainly a portion of the live taping when America votes becomes a popularity contest. It’s hard for me having been in the bottom for four consecutive weeks. It would have taken a lot for me to have come back from behind.”

Was it because of the drastic makeover? She doesn’t think it had an effect — not that she wanted it to.

“I don’t think the change of look was detrimental in any way, but I don’t think it helped me,” she said. “That was not a strategic move for me though. It was about me coming out of my shell a bit and taking some advice from Tommy Hilfiger. He knows more about image than I do. It was a big change for me.”

Why weren’t fans behind her? She didn’t really come out as a personality like some of the other finalists.

“It took a while for me to come out of my shell,” she said. “By the time I came out people were already focused on everyone else who came out with fire. My only regret was not showing my personality sooner. I was always myself. But I was simplified version of myself.”

We think the singer has a future in music, despite the setback.

Do you agree with Erika Van Pelt’s ouster from American Idol?