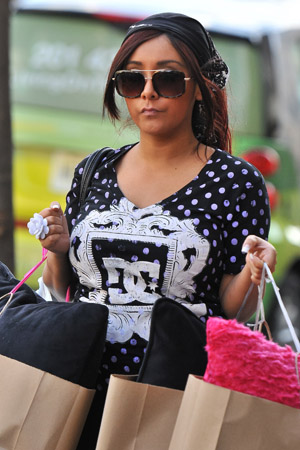 You know how high schools try to discourage teenage girls from getting pregnant by forcing them to take care of a lifelike baby for a week? Well, Snooki is sort of doing the same thing, except she’s doing it to get ready for motherhood. The pint-sized (and pregnant) reality star was spotted with BFF Jenni “JWoww” Farley in Jersey City on Thursday pushing dolls in baby strollers.

The pair were likely doing it for the laughs, since they’re filming their spin-off show in the city by the Hudson river. It might look a little silly, but at least they didn’t dye their babies different colors. After all, they got a verbal smackdown from PETA for dyeing their dogs different colors.

“Dyeing a companion animal’s fur causes the animal stress and can lead to complications or allergic reactions that endanger the animal’s health,” a PETA rep said in a statement. “Our dogs and cats love us regardless of how we look; we should extend the same kindness to them.”

Actually, we doubt that’s going to change anything — Snooki and JWoww aren’t exactly known for their good fashion taste. Will she treat her child in the same way?

“I have different priorities now,” she told US Weekly when announcing her pregnancy. “I don’t care what anybody else thinks. As long as I know I’m ready and he’s ready.”

Next up for Snooki? Buying plenty of baby-sized zebra print dresses, fur boots and Ed Hardy gear. You know it’s going to happen.