While many of her famous peers are turning to plastic surgery in hopes for eternal youth, Diane Keaton isn’t afraid to admit that not only is she 66, but “the end is in sight.” 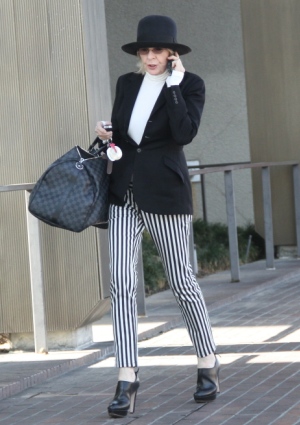 At the age of 66 Diane Keaton has a lot on her mind, including her own mortality. “I worry all the time about everything, actually,” the actress said in a recent interview. “I don’t know how you can’t worry when you’re my age.”

Though 66 may not seem such a high age with stars such as Betty White still opting to work at age 90, Diane Keaton has her family’s health history also weighing heavily on her mind. “I’m very aware that my dad died when he was 68, and my mother was in her early 70s when her brain really started to go,” the Annie Hall actress, whose mother struggled with Alzheimer’s disease, explained.

Still, Diane Keaton has never turned to plastic surgery in hopes of at least looking youthful — at least not yet.

“My thinking about plastic surgery is this,” she said addressing the sometimes taboo topic directly. “I haven’t had it, but never say never. Because when you do, you are definitely going to go there. I said I would never have intercourse before I was married, and I did. I said I would never go to a psychiatrist, and I spent much of my life in psychoanalysis. I’ve done all kinds of things I said I wouldn’t do and, of course, now I’m glad. Thrilled.”

“Let me tell you the best part about getting older,” Diane Keaton went on to say. “The best part is that I’m still here and, because the end is in sight, I treasure it all more. That’s why I don’t worry about crying in a scene anymore. Now it comes easily. I know the emotion’s all there.”

Her words of wisdom to live by: “You have to live life all the way, you know? Take risks. Do things you can’t imagine. ‘Cause, hey, why not, right?”