Kim Kardashian has been flour-bombed at her own red carpet event! Has the tide begun to turn against the Kardashian empire? 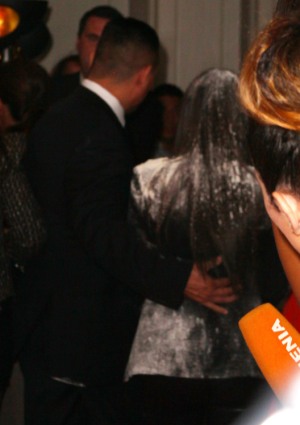 Kim Kardashian’s flour-bomb incident is a bit of a mystery. Who was the bystander who dumped an entire bag of flour on the reality star, why would they do such a thing — and why isn’t Kim more pissed off?

These questions and more remain unresolved, as news Kim Kardashian is a flour-bomb victim spreads. The 31-year-old was speaking with the press at a launch party for her True Reflection fragrance when she was doused with flour by a young female.

“That probably is the craziest, unexpected, weird thing that ever happened to me,” Kim Kardashian commented to E! Online. “Like I said to my makeup artist, I wanted more powder and that’s a whole lot of translucent powder right there,” she said, laughing off the flour-bomb attack.

Kris Jenner, also at the event Thursday commented, “If anybody comes at me with something, call security.”

The Buzz: Kim Kardashian gets bombed


Khloé Kardashian was not in attendance at the flour-bomb event, but tweeted her reaction to Kim’s dousing. “I wish I was with my sister tonight,” she wrote. “I bet you that woman wouldn’t have dared tried a thing…”

Kourtney Kardashian also chimed in, tweeting, “Classy to flour bomb my sister at her charity event helping women. I wonder if they would have dared thrown the flour at my hormonal and pregnant self!”

After being flour-bombed Kim Kardashian walked off of the event carpet, cleaned up, and 10 minutes later returned to cheers and applause from those in attendance. Notably missing at that point was the young woman, who had tried to flee but was held by Kim’s rep before security escorted her away.

There are mumblings the mystery woman mentioned fur before flour-bombing Kim Kardashian, but no motive has been confirmed. The reality star has decided not to press charges, but a non-criminal battery report was still filed.

The Kardashian family has been feeling the heat in recent weeks from their celebrity counterparts, with Kim taking the brunt of the blows. Dishing varying degrees of insults in her direction are big names such as Daniel Craig, Jon Hamm and Jason Statham.

Not only are the Kardashians under a bit of verbal attack from their peers, but now family figurehead Kim has been flour-bombed. It seems the anti-Kardashian movement is picking up speed — and yet Kim doesn’t appear to be upset about the incident in the least!

Something smells a little fishy here — and it’s (presumably) not the True Reflections fragrance.

What do you make of the Kim Kardashian flour-bombing incident?