NBC’s Smash is a …smash? Or at least popular enough to warrant a second season. The peacock network has green-lit the series for another year of singing, dancing, betrayal and drama. Broadway is back! 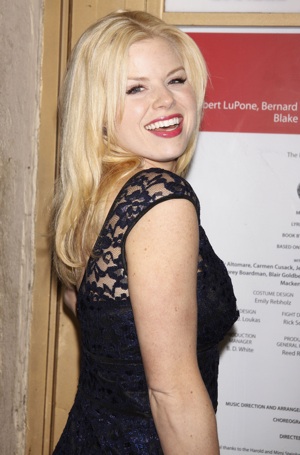 NBC has given Smash its stamp of approval. The freshman drama has been renewed for a second season. Following in the footsteps of fellow newbie, Grimm, Smash will return for the 2012-2013 TV line-up.

Smash made its debut in February and has averaged “7.7 million total viewers and a 2.6 demo rating” according to TVLine. It’s NBC’s highest-rated drama in the coveted 18-49 demographic, which is nothing to sneeze at.

But the road to season two hasn’t been easy. After its premiere, Smash’s ratings took a visible nosedive. It went from 11.5 million viewers its first week to 8.1 million its second. That was more than a 30 percent drop. Since then, the audience has lingered in the 7-9 million viewers range.

Thus far, the series has followed the story of two Broadway hopefuls, up and comer Karen (Katharine McPhee) and veteran performer Ivy (Megan Hilty). Both women are vying for the lead role in a musical based on screen icon Marilyn Monroe.

Season one centers on the humble beginnings of the musical, which explores out of town try-outs, while season two will focus on the big kahuna — New York City. Sources close to the network claim Smash’s second season will consist of “at least 15 episodes.”

Are you psyched for another season of Smash?