Victoria Beckham was back in fashionable form just weeks after giving birth to daughter Harper Seven. How did she do it? A lot of hard work. 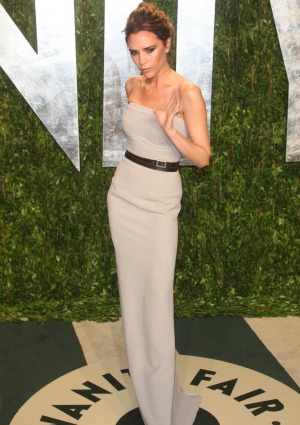 Want to look like Victoria Beckham? It’s going to cost you — if not in cold, hard cash then in time and energy.

The Spice Girl turned fashion mogul told Vogue that the key to dropping the baby weight so quickly after the birth of her daughter Harper Seven is tons of exercise.

Beckham said that strenuous workouts with Tracy Anderson, responsible for the bodies of Madonna and Gwyneth Paltrow, helped her drop the pounds fast.

“I worked out a lot,” the mother of four said. “I ran a lot. I did it six days a week. I become quite obsessive when I get into something.”

Having the right clothes helps, too. “I’ve always had to make the best of what I’ve got,” Beckham explained. “I’ve never been a six-foot-tall, skinny model, so therefore I want to create an illusion. People always think I’m taller than I am — not just because of the shoes I wear but because of the way I dress. It’s all relatively streamlined.”

While she didn’t address it in the Vogue interview, in addition to exercise Beckham is said to have turned to the Five Hands Diet immediately postpartum.

“Five days after giving birth, she started eating five high-protein meals a day accompanied by green vegetables, drinking gallons of water, and only snacking on goji berries and nuts,” an insider told the Daily Mail.

Of course, the poor thing lost too much weight after the birth of her son Brooklyn, she said — and she didn’t even have to try. “I had become Skeletal Spice. What upset me was I ate like any normal person… I wasn’t happy with how I looked,” she said.

Read the entire interview with Victoria Beckham on Vogue.com.