Hilary Duff is finally a mom! The former Lizzie McGuire actress took to Twitter to celebrate the birth of her first son with husband Mike Comrie. 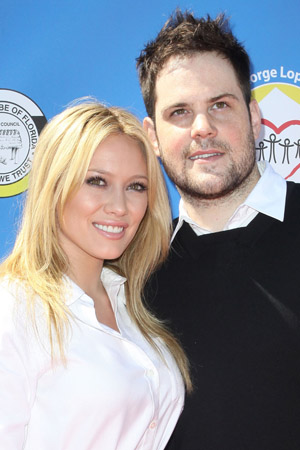 It’s official: Hilary Duff and her husband, Mike Comrie, welcomed their first child into the world earlier this week — and they made the official announcement on Twitter.

“Welcome to the World Luca Cruz Comrie! Tuesday evening, we became proud parents of a healthy 7 pound 6 ounce beautiful boy,” Duff tweeted on Thursday afternoon. “He is surrounded by so much love!! Mom and baby are both doing extremely well.”

“We are overjoyed and feel like the luckiest parents in the world,” they added.

The actress — married to Comrie since 2010 — announced her pregnancy in August on her official blog. “We also want to share the exciting news that… BABY MAKES THREE,” she wrote. “We are extremely happy and ready to start this new chapter of our lives.”

The parents kept pretty quiet about her pregnancy, though the former Lizzie McGuire actress finally spilled the beans on the baby’s sex during an appearance on Ellen.

“I haven’t told anyone yet, I wanted to tell you first. I just found out,” she gushed. “It’s a boy! I had a feeling it was a boy the whole time.”

Duff also told the talk show host how she told her husband that they were expecting.

“He was like, ‘AHH!’ He was soaking wet. We were just like a mess and started crying. It was really exciting!”

We think that Duff is going to be a super cool mom, based on her laid-back approach to the typical pregnancy struggles. “I feel great, actually. It’s been super easy,” she said, adding that pregnancy is “kind of like a little alien has taken over your body. You just don’t quite feel normal. But it’s cool.”

Congratulations to the happy parents!