Pregnancy is a delicious piece of cake for Kristin Cavallari — one so good that she and fiancé Jay Cutler are planning on having more kids as soon as possible! 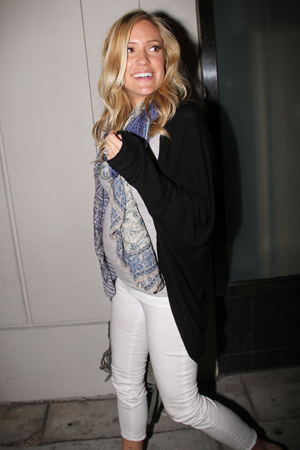 Apparently, pregnancy just happens to be much easier for some people, and Kristin Cavallari is one of those women.

“I am actually enjoying it which may sound crazy to some women, but I’ve had a really easy pregnancy,” said Cavallari to Glamoholic. “The first couple of months I was tired, but I didn’t have any morning sickness. Which, I’ll take being tired any day over throwing up.”

Though her discomforts have been minimal thus far, the former Laguna Beach reality television personality did admit that she never envisioned herself becoming pregnant at such a young age.

“It’s so crazy to look at your life and see how far you’ve come,” she said. “I always wanted kids, but I always thought I would have kids later on in life, maybe when I turn 30.”

She and fiancé Jay Cutler had been teasing the idea of having a child together. “We left it up to fate. I knew there was a possibility, but I was really excited,” she elaborated. “Even if you are trying, just to see a positive result is shocking!”

Though she’s both engaged and pregnant right now, she shared that what’s next may be a little bit out of order, according to traditional standards.

“We’re talking about the possibility of having another kid right away and then getting married so we can have two kids close in age,” Cavallari revealed. “We want four kids, so we’re thinking maybe have one more, then get married, then have two more, but we’ll see, it all depends on how the first one goes.”

So what parenting strategies have they nailed down thus far? “We both don’t want to raise our kid with paparazzi and cameras in our face. We want to give them as normal of a life as possible.”