Kim Kardashian insists she was just trying to do the right thing when she ended her marriage after 72 days, as she carefully explains while avoiding any mention of her ex’s name. 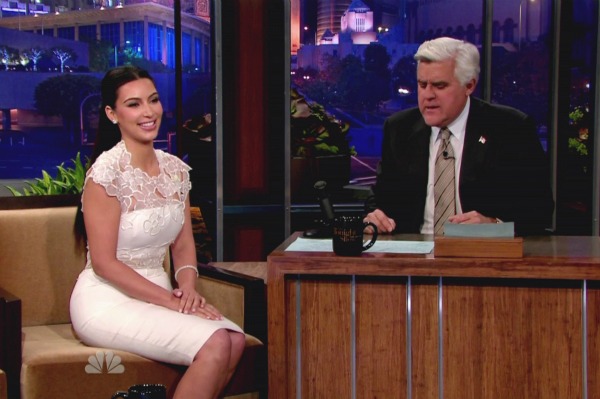 Kim Kardashian is milking her split from Kris Humphries for all it’s worth. Months after she announced she was ending her marriage — just 72 days after the wedding — the reality star is still yapping about true love.

In an appearance on The Tonight Show with Jay Leno, Kardashian rehashed her failed marriage, gave the same reasons she always does, and curiously never once mentioned her ex by name.

“I’m a girl who really believes in love, I’m in love with love and I thought this was it for me,” she told Leno.

Anyway, Kardashian said she felt it was better to end it now than drag it out and be miserable for a decade like other couples do.

“I’ve heard stories of people who were married for 10 years and they knew it wasn’t right, but they wanted to stick it out and had kids,” she said. “I want that forever, I believed in love, I still do. But to be fair to everyone, I knew I had to end it and I’m OK with that decision.”

Kardashian admitted that she fully ignored the warnings from her family that she was moving too fast and that Humphries wasn’t right for her — but she had to do what she did to learn the lesson.

“I’m a person, when I’m in love, you can’t tell me anything and you gotta go through it yourself,” she said. “So, I did what I believed in doing, and sometimes you don’t want to hear what your family has to say. You look back and you’re like, ‘OK, that was a sign,’ or, you know, ‘Maybe I should have listened to them.’ But, I wouldn’t have been who I am today had I not gone through that.”

That’s all well and good, but next time she should probably listen to Khloe. Just sayin’.

Watch Kim Kardashian on The Tonight Show with Jay Leno: