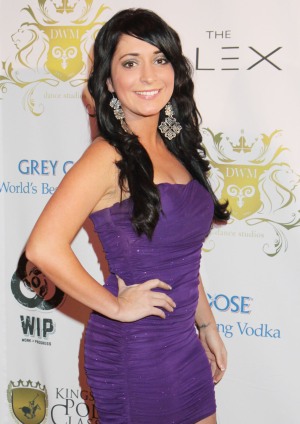 Mike “The Situation” Sorrentino’s pill addiction and subsequent visit to rehab comes as no surprise to Jersey Shore‘s cast-off Angelina Pivarnick. The booted member of G-T-L crew isn’t holding back in the least when it comes to her former housemate’s bad habits. Classy.

When asked about The Situation‘s pill addiction Angelina Pivarnick quipped he was like “Popeye on crack,” to Page Six.

“When he was on the show, he got in trouble for having prescription pills,” Pivarnick went on to elaborate, spilling any details she could recall of her brief stint on Jersey Shore. “We were filming in a club in Miami… one of the producers said, ‘Hey what was that?’ He had to give them up.”

In contrast, current cast mates of the show have chosen not to speak publicly about The Situation’s voluntary choice to get treatment — though that doesn’t necessarily mean they didn’t have a hand in helping him get on the right path.

An unnamed source has told the Chicago Sun Times “it took a village” of friends to convince the Jersey Shore star just how bad his problem was, and to seek treatment.

“He has been out of control for a long time and has been saying some really bizarre stuff for months,” the source explained. “He thought everyone was out to get him, and he’d say things that made no sense. Really nutso.”

Do you think Angelina Pivarnick’s Popeye jab was an unfair low blow at The Situation?