Tricky little Taylor Swift knows that there is only one way to get a guaranteed audience on the web: Cat videos. The singer is using this brilliant tactic to garner more votes for the ACM Awards. 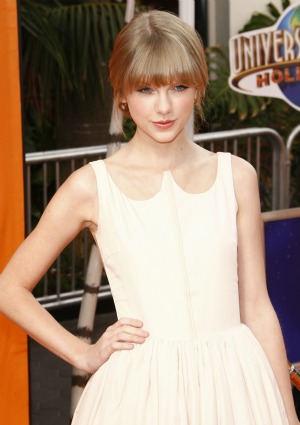 Taylor Swift knows that the internet was invented for exactly three things: Celebrity gossip, adult entertainment and cat videos. Guess which one she’s using to nab votes for the Academy of Country Music Awards?

No, no that one you perv. Swift decided to record herself having a little chat about the ACMs with her adorable Scottish Fold kitten Meredith — and the little fluffball got schooled in the ways of fan voting.

“So you’re new here, so you don’t really know this yet, but this is coming up on a really amazing thing that happens every year — the ACMs,” Swift explained to the cat. “You don’t know how this goes, but I thought I’d explain it to you. Is that cool?”

“So, like, we got nominated for Entertainer of the Year, which is huge and wonderful.”

“And the thing about the ACMs is that it’s fan voted. So people can go on and vote once a day starting March 19, which is awesome, all the way up until the show, which is just, so cool. Do you think that people should go and vote for us? Maybe?” Swift asked.

“That would be really cool, right? It’s be awesome!” Swift said, hoping for a response from the cat. None came. “Good talk!”

Watch Taylor Swift explain the ACMs to her cat: