The Situation tried to deny that he was in rehab for a drug problem, but he finally fessed up in a Wednesday blog post. What’s his drug of choice and how is he dealing with the problem? 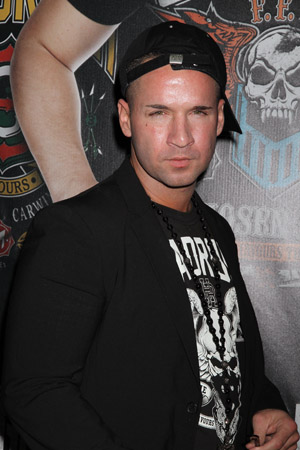 Maybe this is why Mike ‘The Situation’ Sorrentino was a big vindictive baby during the last season of The Jersey Shore: He’s just admitted that he’s getting help for a prescription drug problem.

“I have voluntarily taken steps to get control of a prescription medication problem I had due to exhaustion,” The Sitch wrote Wednesday on his website. “I have spent the past several weeks getting treatment for this problem and recuperating from my work and appearance schedule. I appreciate my fans support and love you guys.”

Word of a rehab situation emerged Tuesday on TMZ, though his rep tried to deny it at the time.

“He is not in rehab for substance abuse,” the flack said in a statement. “He has spent the last several weeks at an undisclosed location for much needed rest and recuperation after his extensive production and appearance schedule.”

The 30-year-old returning reality star added to the mystery with a tweet. “Don’t believe everything you read or hear,” he wrote.

Well, at least he’s getting help for his problem — drug abuse rumors have plagued the tanned-and-toned crew since they started on the show in 2009. Sammi ‘Sweetheart’ Giancola denied that any drug use went on in the Shore house throughout filming during an interview with XOJane.com.

Maybe she was telling the truth and this is a new development with The Situation. After all, we don’t think she’d have a problem shedding light on his problem, given that she hates him.

“Mike’s the troublemaker in the house and I think he loves it,” she added. “He loves to stir up the drama, that’s just who he is. He’s a part of my family, he’ll always be a part of my family… but he’s like that brother that you just never really wanted.”