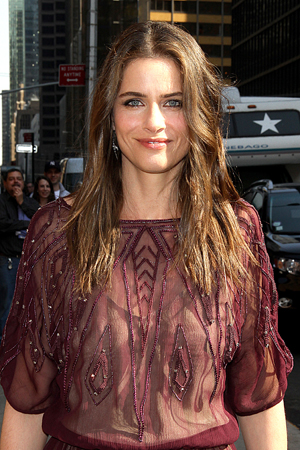 The onscreen would-be couple of Bent will introduce itself on the season premiere later tonight on NBC, but actors Amanda Peet and David Walton are very frank when discussing what to expect of the other.

“Amanda Peet plays Alex,” explained David Walton to The Hollywood Reporter. “She’s a recently divorced mother, her ex-husband’s in jail, she’s got a 10-year-old kid and she decides, you know, I want a fresh start — I’m gonna move to Venice, California. So she buys this kinda rundown house, and she needs someone to fix it up.”

Peet’s character is also dating a surgeon on the show. “I’m sort of in that ‘once bitten, twice shy’ sort of space where I don’t want to take a lot of risks. I’m trying to keep everything together,” Peet added. “And then David Walton walks in my door and I hire him to be my contractor.”

So who is Walton’s character, Pete, exactly? “He’s a motorcycle-riding, pot-smoking, womanizing bad boy.” said Peet, in all honesty.

Not only will we meet Pete and Alex tonight, but Bent‘s ensemble cast also includes Jeffrey Tambor of Arrested Development, J.B. Smoove of Curb Your Enthusiasm and, surprisingly, Deadwood‘s Pasha D. Lychnikoff.

“Oh my God, where do we start? First you have this Russian,” Walton said of the ensemble cast. “They’ve cast this guy, Pasha, who truly has never not played a villain. And now, he’s playing a plumber, like a lighthearted plumber.”

Tune in tonight for the premiere of Bent at 9 p.m. EST on NBC.