Every fan has picked a side, and now the actors are swearing their allegiances! Elizabeth Banks shares why she’s Team Peeta and what’s up with that Effie Trinket. 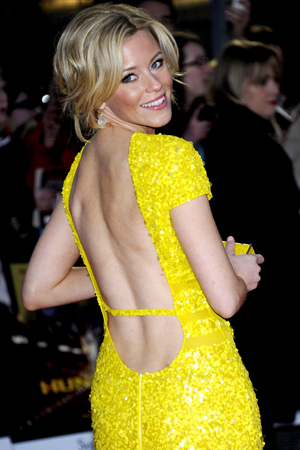 Actress Elizabeth Banks has spoken her piece on the love triangle in The Hunger Games — is she Team Peeta or Team Gale?

When asked at the Slate.com Culture Gabfest if Jennifer Lawrence should choose Josh Hutcherson’s character or Liam Hemsworth‘s, Banks replied, “Definitely Team Peeta,” according to The Hollywood Reporter. “There’s just something about the way he loves Katniss so deeply.”

Banks also took a minute to explain her fictional alter ego, Effie Trinket. “She’s the villain and she’s a PR maven,” she said. “She definitely drank the Kool-Aid. Her job is to lead young people to their death but she has a great outlook about it.”

Elizabeth Banks transforms into Effie for The Hunger Games >>

It’s not just her attitude that’s a handful — Effie’s look was inspired by a multitude of influences, including Marie Antoinette and Japanese Kabuki theatre. “The director talked about Joel Grey in Cabaret.”

One of Banks’ favorite characters in the book was left out of the movie: The District 12 mayor’s daughter, Madge Undersee, who gives Katniss a pin that she wears in the games.

And as a new mom, Banks was asked what age she feels is suited to see The Hunger Games: “Well, the movie is rated PG-13. So I have to say the appropriate age would be 13,” she warned. “But horrible things are happening in the world all around us — look at the Congo — and this is only a movie.”