Russell Crowe is ready to build an ark. The Oscar-winning actor has been cast in the title role of Darren Aronofsky’s Noah. The Aussie will play the Biblical figure best known for surviving the famous flood. 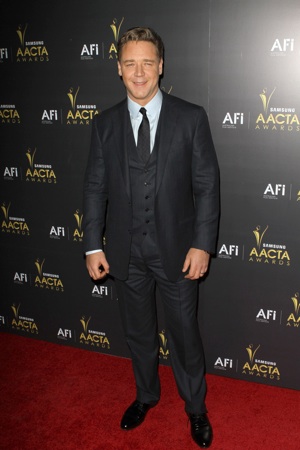 Russell Crowe is tackling a role of epic proportions. After months of negotiating, the actor has been confirmed for Darren Aronofsky‘s new drama, Noah.

The film will re-tell the story of the title character and the building of his ark.

Prior to Crowe’s casting, Christian Bale was the director’s first choice to play the role. Unfortunately, Bale had scheduling conflicts with two other films, Lawless and Knight Of Cups. That left the door open for another star to take his place. Cue Mr. Crowe.

According to Deadline, Noah is a real passion project for Aronofsky. During the development process he revealed, “Since I was a kid, I have been moved and inspired by the story of Noah and his family’s journey. The imaginations of countless generations have sparked to this epic story of faith. It’s my hope that I can present a window into Noah’s passion and perseverance for the silver screen.”

Aronofsky is so dedicated to Noah that he dropped out of the comic book sequel The Wolverine. The Hugh Jackman film will now be directed by James Mangold (Walk the Line).

Russell Crowe is taking on one iconic character after another. Later this year, he’ll appear in the musical Les Misérables as the villainous Inspector Javert. And in 2013, he’ll play Superman’s father Jor-El in Zack Snyder‘s Man of Steel.

As for Aronofsky, his last feature was 2010’s Black Swan. It was a critical and commercial success, which grossed $315 million worldwide on a $12 million budget. It also earned Natalie Portman an Oscar for best actress in a leading role.