Robert DeNiro’s joke at the expense of First Lady Michelle Obama is teaching a valuable lesson: It’s not funny if no one is laughing. 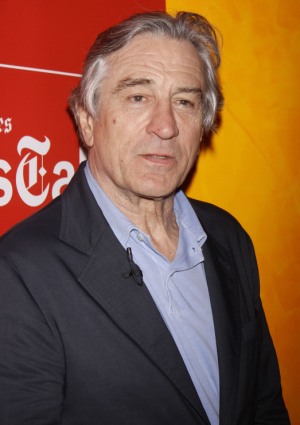 Robert DeNiro is sorry he cracked a First Lady joke at an Obama fundraiser — sort of. Perhaps it’s more accurate to say he’s sorry the joke was ill-received, rather than wishes he could take his moment of jest back!

Mediaite reports the Robert DeNiro/First Lady faux pas went down on Monday, when the actor asked those in attendance about whether the nation was “ready for a white first lady.”

Pointing out the spouses of the Republican candidates the 68-year-old said, “Callista Gingrich. Karen Santorum. Ann Romney. Now do you really think our country is ready for a white first lady? Too soon, right?”

Quick to react was Newt Gingrich, who said Tuesday, “I do want to say one thing, both on behalf of my wife and on behalf of Karen Santorum and on behalf of Ann Romney: I think that Robert DeNiro’s wrong. I think the country is ready for a new first lady and he doesn’t have to describe it in racial terms.”

Brad Pitt as Newt Gingrich? A politician can dream >>

“What DeNiro said last night was inexcusable… It was at an Obama fundraiser, it is exactly wrong, it divides the country,” Newt Gingrich went on.

Michelle Obama was in attendance at the fundraising event, but has yet to respond to Robert DeNiro’s joke. A spokeswoman for the First Lady told NBC the joke was “inappropriate.”

For his part, DeNiro had only this to say about his First Lady joke, “My remarks, although spoken with satirical jest, were not meant to offend or embarrass anyone — especially the First Lady.”

Do you think Robert DeNiro’s First Lady joke was inappropriate?