The wife of KONY 2012 creator Jason Russell insists his public breakdown was not due to drugs or alcohol, blaming temporary insanity instead. Read on for her latest statement. 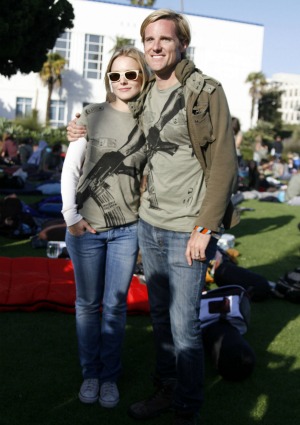 Jason Russell isn’t on drugs, he’s just loony tunes according to his wife. The filmmaker behind the KONY 2012 video (pictured here with actress Kristen Bell) is being treated for psychosis and has a long road ahead before he can be involved in his Invisible Children organization again.

In a new statement to the press, Danica Russell said:

“Thank you to those who continue to support both us, and Invisible Children. The organization is an extension of our family, and we hope that Jason’s vision and work toward peace in the region remains the focus, and comes as soon as possible, as they continue to work in his absence.”

Celebs targeted by the KONY 2012 campaign >>

“We would, again, like to make it clear that Jason’s incident was in no way the result of drugs or alcohol in his body. The preliminary diagnosis he received is called brief reactive psychosis, an acute state brought on by extreme exhaustion, stress and dehydration. Though new to us, the doctors say this is a common experience given the great mental, emotional and physical shock his body has gone through in these last two weeks. Even for us, it’s hard to understand the sudden transition from relative anonymity to worldwide attention — both raves and ridicules, in a matter of days.”

“Jason will get better. He has a long way to go, but we are confident that he will make a full recovery. He is, and will remain, under hospital care for a number of weeks; and after that, the recovery process could take months before he is fully able to step back into his role with Invisible Children. During that time, we will focus not on a speedy recovery, but a thorough one.”

“On Jason’s behalf, keep your attention turned to the end of Africa’s longest running conflict, and setting a precedent for all future injustice.”

“With love and overflow of gratitude for your prayers, we thank you.”

Jason Russell was caught on video running the streets of San Diego buck naked, screaming obscenities and vandalizing cars. Police took him to the hospital on a 5150 hold where, according to Invisible Children, he was found to be suffering from “exhaustion, dehydration, and malnutrition.”