Reese Witherspoon, you are pregnant! Gossip sources are announcing the star is expecting a baby with husband Jim Toth, despite any actual word from the actress herself. 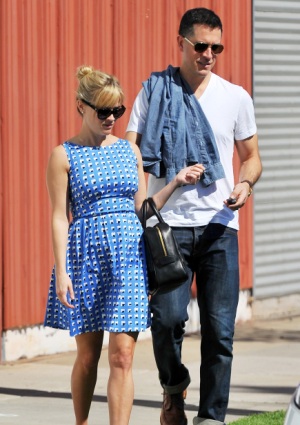 Reese Witherspoon is pregnant? Breaking news says there’s a baby on board for the actress and husband Jim Toth — here’s hoping the pair knew about it before the press announced it to the world!

If Us Weekly‘s sources are correct, Reese Witherspoon and Jim Toth will soon be parents of their own little one. That means Ava and Deacon, her children from first marriage to Ryan Phillippe, have a half brother or sister on the way!

Shouting the Reese Witherspoon pregnancy news from the hilltops Wednesday morning, Us Weekly cites multiple anonymous sources as having spilled the baby beans. “Reese is right around 12 weeks,” one confidante explained, adding that the This Means War star is “not planning to announce it.”

Speculation of Reese Witherspoon’s pregnancy began weeks ago when the actress, set to celebrate her 36th birthday tomorrow, showed up at church looking suspiciously round in the mid-section. She and Jim Toth are pictured here leaving here leaving services in Santa Monica on March 4.

While the public may be surprised by Reese Witherspoon’s baby news, it’s less shock and more of a wish come true for the couple, who have reportedly been trying for a pregnancy since exchanging vows on March 26, 2011.

“The timing is right,” added another source. “She’s so happy!”

A birthday, first wedding anniversary and pregnancy news to celebrate all within one week? She ought to be ecstatic! Best wishes Reese Witherspoon for a happy and healthy pregnancy — assuming the rumors are indeed correct!

Do you believe the Reese Witherspoon pregnant rumors are true?