Jennie Garth says that she and her kids are doing just fine and dandy after her split from husband of 11 years Peter Facinelli — and her new reality show couldn’t have come at a better time. 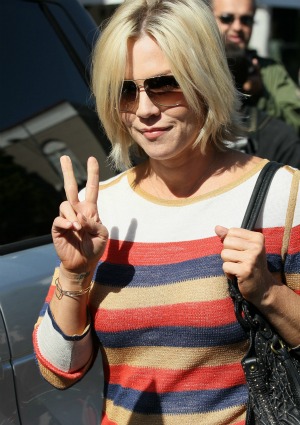 Actress Jennie Garth has been through it all: Date rape, a cocaine addiction, nearly dying in a fire, saying goodbye to both Brandon and Dylan at the exact same time… Oh wait, that was her Beverly Hills, 90210 character Kelly Taylor. Um, we’re sure Jennie Garth has been through a bunch of stuff, too. Now she’s dealing with the disintegration of her marriage to Twilight star Peter Facinelli after 11 years — but she says she and her kids are doing great, so there.

Garth and the kids are starring in a new reality show called Jennie Garth: A Little Bit Country which will see the clan — minus Facinelli — check out of Hollywood and take up residence on a farm in rural central California: A move the actress said couldn’t have come at a better time.

“I wanted to move out of the city for a while and something inside of me said, ‘It’s time.’ I needed that sort of shelter, some things in my life have been transitioning. I just needed that,” Garth said in an interview with Access Hollywood.

“We’re doing great,” she said. “My life is a little hectic right now and my personal life is kind of crazy. This is what I need and what the girls need right now, so it’s perfect,” she said, referring to the split from Facinelli.

So will the new show deal with the split and its aftermath?

“Yeah, I will say yes, but I hope that people tune in and find out,” she explained, adding she had “no idea” a split was imminent when she signed on for the show.